Have you ever thought about what the Second Coming would actually look like? Other than what the Bible had told me: darkness will rule the earth, Jesus will come to judge and thus will follow a thousand-year kingdom of peace on earth – it t was something I hadn’t considered deeply until this week when I binge-watched Netflix’s latest venture, Messiah, a crime drama about a charismatic man dubbed ‘Al-Masih’, which literally translates to ‘the anointed one’.

The controversial show has gained a lot of attention in the three days since its release – with Christians and Muslims alike threatening to boycott Netflix for their depiction of the Second Coming, while the streaming service insist it’s not based on “any one figure or religion” and purely there to spark important religious, political and social conversation. Others have taken to social media to slam the show’s composition as “boring”, “predictable” and “embarrassingly obvious” in its use of religious text.

With all this conversation going on, there’s no need for me to offer up whether or not I support the show. Instead, and I’d argue this was director Mike Petroni’s purpose, it has me posing questions: “What would I do?”, “What would He look like?” and “Would I believe?” In Messiah, ‘Al-Masih’ gains quick following from religious people all over the world, performing a litany of miracles from healing the wounded to walking on the water of Washington’s Lincoln Memorial Reflection Pool, while the CIA fight to disprove him. But, would that be enough for me (and indeed for you  and your young people)?

I put these questions to a friend after we watched the first episode together and his response took me aback. “Even if Jesus did return now, and I saw him with my own eyes – even if he performed miracles in front of me, I don’t know what I’d believe,” he admitted. “The whole basis of my faith is the faith part. Jesus doesn’t stand in front of me, I can’t see him as I see another person, yet I have to have faith in him. So if that faith part was taken away and suddenly became proof, I don’t know what that would mean. And even then with proof, I don’t know if I’d believe it was real.”

The show harnesses the same energy – focusing on the use of social media and 24-hour news to spread Al-Masih’s message – to ask whether or not seeing really is believing. Something which I believe is worth thinking about. While thousands see the footage of Al-Masih somehow appearing in Texas just hours after being seen at the Temple Mount in Jerusalem and believe it as a miracle, perhaps natural for those of us who believe in Christ, the show gives equal time to sceptics picking apart his every move – scepticism that would only be natural in a digital age of CGI and Darren Browne, of hoax videos rising to the top of the YouTube algorithm and quickly-digested, click-bait news. 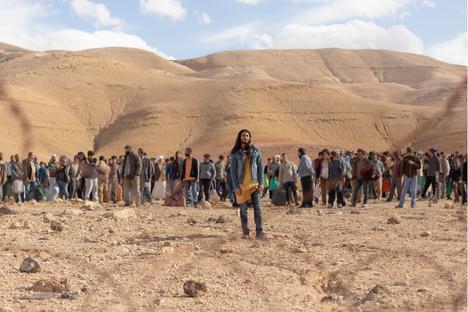 Once we’ve worked our way around the scepticism of belief and miracles, we have to consider: what would a modern day Jesus look like? I’ve personally never thought hard about it, but it makes sense for him to match the society we live in. The Netflix show depicts a new form of the Jesus archetype – though typically long haired and of Middle Eastern descent, this version of the Messiah wears baggy cut jeans and sports hoodies, at one point putting his locks up in a man bun to reveal a Nike logo on his tracksuit. This modern Messiah utilises the power of social media to spread the message. He uses inclusive language when speaking about his followers, maybe controversially, referring to his followers as the gender non-binary “all people”.

Finally – it’s worth pondering on what a modern day Jesus would achieve. Of course, the Bible tells us it will be peace, the opposite of what is achieved in Messiah, which closes with a dramatic panoramic of a church in flames and death on all sides. But whether or not the achievement of peace will be as simple as we may think is another thing. Netflix will no doubt harness the opportunity to create a second series, so we will have to wait and see if it comes about in the fictional world. Until then, whether you agree with the series or not – it’s worth thinking about what all of this would look like, and what you and your young people would believe.

“Messiah sort of acts like a reminder that it is coming, and that we don’t know when and how – but that we need to prepare ourselves,” my friend continued with huge wisdom, overlooking the crime drama to the crux of the meaning of the Second Coming for us as Christians. Like it harnesses in the series, he concluded: “Because if there was an Al-Masih and it turned out to be a hoax, then it meant nothing and the world will go on. But if he was real, it would mean everything, right?”

For a group discussion, if you have a Netflix account, watch Episode Six of Messiah – noting that it is certificate 15 – from 33:05 to 39:00 (if not, watch the season trailer) and discuss the following questions: