Dawn Savidge thinks the film handles some tough themes which can lead to some valuable thinking. But this is more for you than your teens 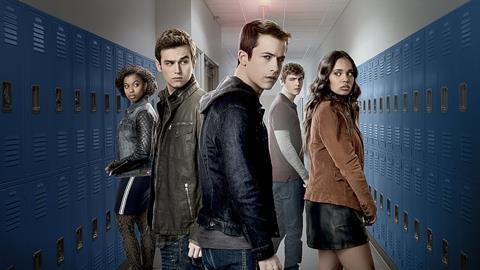 Other connected films/TV series: None

Overview: Hannah, a teenage school kid, takes her own life. Two weeks after her death, Cole, her classmate and work colleague, finds a collection of tapes that give 13 reasons why she committed suicide.

The script is very carefully written and switches between the two timelines of before and after Hannah killed herself.

There is quite a bit of bad language, but it rated 18 so it is expected. There are also four seasons, 49 episodes, so that is quite a lot of television viewing.

I have been affected by suicide, both personally and in the work that I do, so I was interested to watch a drama surrounding this subject. It is not only beautifully written in terms of giving viewpoints from the victims perspective, but also portrays the heartache that suicide leaves behind for family and friends. I was very interested in the series makers care for the viewer. Knowing that it would be a triggering programme, Netflix have released lots of short promo videos about issues that Hannah faced; bullying, consent, drug and alcohol abuse and how to talk with your teen about the show. Alongside that, they also have website which points people to support groups. I have not watched this with my children due to the 18 rating. But I wanted to watch it to give me an insight into what my children are facing today and to help me structure good Godly conversations with them about issues that are raised. I think that it is so important as parents, to try and understand what our children are facing and to have honest and open conversations about how we can live out our faith in an increasingly secular world which is full of ungodly pressures.