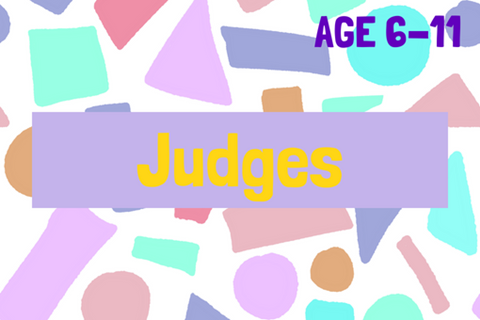 Background :After God’s people entered the Promised Land, their commitment to God waned, and they started to follow other gods. As punishment, God allowed them to be attacked by their enemies, but when they cried out to him, he sent a leader to rescue them. The overall theme of Judges is of Israel’s persistent faithlessness and God’s never-ending faithfulness. Help children to explore that God never forgot his people, just as he hadn’t when they were slaves in Egypt. What might this mean for children’s lives today? Talk of a saviour might lead to conversation around to Jesus.

5 As the children arrive, sit everyone down in a circle. Ask the children if they have done anything this week and to tell the group about it. Share something that you have done this week too.

You will need: a selection of random objects; tray; tea towel

Play the game again with some new objects, but as you show tray, read out a list of different objects. How many can they remember this time? Is it easier or harder? Was the list a distraction to remembering?

Chat together about how easy or difficult it is to remember important things when there are lots of distractions.

You will need: plant; Bible

Fill in the story so far, so that the children know what has happened in between the last session and this passage. God’s people were free and living in the land that he had promised them. But soon, they turned away from God and started to follow the gods that other people worshipped. Teach the children the actions to these repeated phrases:

Ignored God and did bad! The children should stamp their feet and make an angry face.

God sent someone to rescue his people! They should make a happy face and cheer.

Go on to tell this story. Adapt it to fit your group if you wish:

Ask the children if they can see the pattern. Every time God sent someone to rescue his people, once that person had died, God’s people went their own way again! And they got into trouble… Read out Judges 2:6–19 so that the children can hear the Bible passage and see where this story comes in the Bible.

You will need: art materials, paper

Set out lots of art materials and encourage the children to create a picture that is a response to what they have discovered about God’s faithfulness. A leader could share a story from their own life as a stimulus for thought, or the children could just dive straight in. As you work, chat about how God was faithful to his people. Wonder together about whether the people deserved God’s faithfulness and why God might have stuck by his people. When everyone has finished, give space for anyone to share what they have done if they would like to.

You will need: pictures from the creative response activity; a song about God’s faithfulness and the means to play it

Put the pictures you made in the creative response up around the room and ask the children to walk around and talk to God about anything the pictures prompt. As they do so, play a song about God’s faithfullness.

When everyone has finished walking around, use the words of the song as a prayer of thanks or as a way of asking God to be with the children. Give the children chance to pray out loud themselves, if they have anything they would like to talk to God about today. Say a general blessing to end this time of prayer, thanking God that he is faithful.