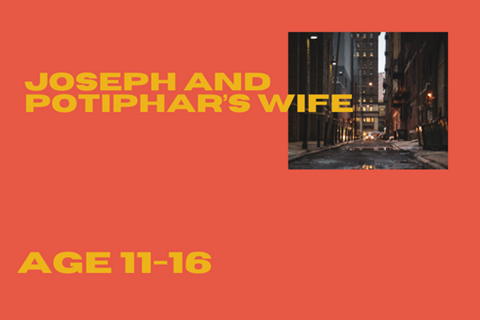 Background: Joseph’s life was a rollercoaster. Starting out as a boastful teenager, he learnt a great deal and God blessed him greatly at every twist and turn. As a slave Joseph had very little choice about what he could do, but he still stood up for what was right and had to face difficult consequences as a result.

Serve up your usual refreshments, some in disposable cups and others in glasses. If possible, give some people paper straws and others plastic straws (but don’t buy any specially as that defeats the object). Take the opportunity to chat about the use of plastics and the effect it is having on the oceans. Ask the group what they know about this and look up a few facts. If they seem interested, discuss what we can do about it. How can we make the world physically pure and holy for God?

Use whatever you have to hand to create a blow football table. Use glasses for goalposts, and make side and back walls out of old cardboard or books to stop the ball dropping off the table.

As you play, help the group think about strategy. In order to win the game, is it enough to just defend your own goal or should you also attack the opponents’ goal? There is a parallel here with our sex lives: do we simply try to avoid harmful relationships and situations? Or do we pursue holiness and healthy relationships? Or both? Tease out the young people’s thoughts on this from their experience, but also theoretically and theologically.

You will need:Bibles; pens and paper

Explain to the group that Joseph wasn’t much older than them. Encourage the young people to come up with a present-day example of the situation Joseph found himself in. They could work in pairs or small groups. Share the situations and imagine how Joseph might have acted in each one.

Discuss the Bible passage using these questions, as well as some of your own. Give everyone the chance to contribute if they would like to:

Joseph was faced with a difficult temptation, but he spotted it and tried to get away from the situation as quickly as he could. There are three elements to this kind of scenario:

In pairs, ask the young people to write down fictional scenarios that young people face today using these three points. For example:

Draw a see-saw on the large piece of paper and label one side ‘Flee temptation’ and the other ‘Give in to temptation’. What suggestions can they come up with to help them want to avoid temptation more than to give in? Write the ideas on the appropriate side.

Collect as many ideas as possible on how to avoid being in a vulnerable SITUATION in the first place, as well as ESCAPE techniques for getting away from the source of TEMPTATION as quickly as possible. This might include things like calling a friend, going off to do something else, visiting a friend, switching your phone off, not staying up after your family go to bed, and having rules for yourself, such as not being alone with your boyfriend or girlfriend when everyone else is out or not looking at your phone after 9.30pm.

Give out the slips of paper and sweets. Encourage them to choose some of the best strategies from the see-saw, with relevant scriptures if they like. They should write these on the slips and tape them to the sweets. Put them in a bag and invite the group to keep these sweets for ‘temptation emergencies only’. These could be times when temptation is coming at them and they just need a little inspiration to get them away from it. Even just the act of going somewhere to fetch these sweets might be enough to break the moment of temptation.

You will need: see-saw from ‘Creative response’

Look at the see-saw again. In pairs, ask the young people to pray for each other about the areas they find most difficult. Don’t let them talk the whole time – encourage them to pray!