Joseph and his brothers: Session 1

By Claire Benton-Evans is the author of the All-sorts Worship series, All-sorts Prayer and the new Beastly Bible Stories series. She is the youth and children’s officer for the Diocese of Edinburgh. 2019-09-24T00:00:00+01:00 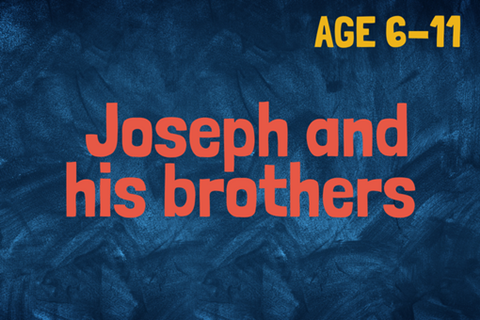 BACKGROUND: Many children will be familiar with this story, if only through the ever-popular musical. Knowing what happens to Joseph in the end we understand that God has everything in hand, yet in this chapter God is not mentioned. The focus is entirely on the human drama of an unwise father, a favourite son and the brothers’ simmering resentment, which boils over into violence.

It’s a way into thinking about bullying and the complex feelings involved. It is important for children to learn that bullying is never ‘deserved’, even if the victim is as cocky, annoying and careless of others’ feelings as Joseph appears to have been. This session helps children explore the emotions in Joseph’s story and gently to consider their own before placing all their feelings within the context of God’s love and care.

As the children arrive, chat about some of the highs and lows of the past week. Share about times when you have felt happy, bored, excited, angry, sad or proud, and encourage the children to do the same. Discuss who we tend to share these feelings with. Friends?

You will need: Joseph and the Amazing Technicolor Dreamcoat (1999), available on Netflix or to rent on other streaming services; the means to show the clip

Show the children the song ‘Joseph’s coat’ from Joseph and the Amazing Technicolor Dreamcoat (starting at 00:08:44). Encour- age them to sing along if they know the song. Chat together about Joseph and his story. What do the children already know?

You will need: scenes from Joseph’s story printed on separate cards; a camera or smartphone; a laptop and projector

Before the session, print out or write these scenes onto separate cards:

The favourite: Joseph had eleven brothers, but their dad loved him best. Joseph received a special coat from his dad, which made his brothers really jealous. They started to hate him.

The dreamer: Joseph had a dream that he and his brothers were collecting sheaves  of corn at harvest time. He dreamt that his brothers’ sheaves all bowed down before his. He had another dream that the sun, moon and eleven stars were bowing down to him. These dreams made his eleven brothers hate him even more.

The victim: Joseph’s brothers got him while he was on his own, then ganged up on and attacked him. They threw him into a pit and left him there to die.

The slave: Joseph’s brothers decided to  sell him as a slave instead. They sold him  to some passing travellers who took him to Egypt.

The lost son: Joseph’s brothers covered his special coat with goat’s blood and told their dad that a wild animal had killed his favourite son.

Give out the cards with the scene descrip- tions and read them together. As a group, work together to create freeze-frames of these key scenes, as if you have paused a film of Joseph’s story. Focus on using bodies and faces to express emotions. Encourage the children to take it in turns to be the direc- tor, standing outside each scene to compose it. Take a photo of all the scenes and show them to the group at the end. (Remember

Explore the story further by discussing these questions:

You will need: jam jars (with lids) or mason jars; different coloured sand in separate bowls (you can mix play sand with powder paint for this and potentially add biodegrad- able glitter)

Talk about the many different emotions involved in today’s story, asking the children to name some. Introduce the coloured sand and invite them to suggest which colours might represent which feelings. (You don’t all need to agree on this.) Give the children a jar each and ask them to fill  it with different layers of sand to represent how they are feeling at the moment. There might be a broad band of one colour, a thin sliver of another and a repeating stripe to represent a feeling that keeps coming back.

As you fill your jars of many colours, chat further about the emotions in the story or about the children’s own feelings. Let them take the lead and don’t force the conversation. They may find it easier to focus quietly on the coloured sand, and they don’t have to explain what they have put in their jar.

It might be useful to share this advice from the Childline website (childline.org.uk): “Nobody has the right to bully you. Bullying could be done by friends, family, people at school and strangers – but it’s never OK. Where to go for help: tell  someone  you trust, or phone Childline: 0800 1111.”

You will need: jars of many colours from ‘Creative response’; a long red ribbon or a piece of red wool outlining the shape of a heart

Gather everyone around the heart shape with their jars of many colours. Say this prayer:

Loving Lord, you understand all our feelings. To you they are as clear as the colours in these glass jars. We bring all our feelings to you now and entrust them to your loving care.

Place your jars of many colours inside the heart and say amen together.

Be watchful and available for children who may need to talk to you after the session.