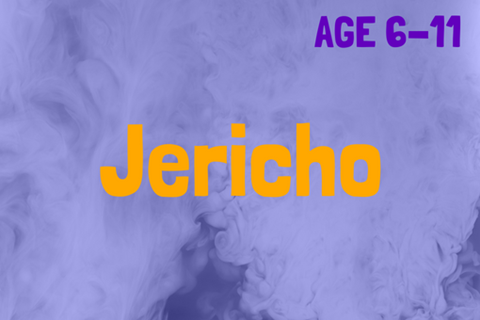 BACKGROUND: God worked in unexpected ways to bring down the walls of Jericho, and Joshua took a step of faith. It might have looked silly to others and felt like an impossible task, but he listened carefully and followed God’s instructions. As a result, the glory of the victory could be given only to God.

It’s worth noting that in order for the Israelites to inhabit the Promised Land a whole city’s worth of non-believers were killed. This is difficult to understand and explain, but we shouldn’t avoid it. If this comes up in discussion, let the children ask questions and wonder together as to why things might have happened the way they did.

Gather the children together for a time to catch up, build relationships and reflect on the week just gone. Have people share exciting news such as birthdays, trips or events. You might like to use the following question to start the conversation as a light-hearted way into today’s theme: “Would you rather face an army of duck-sized horses or horse-sized ducks?”

You will need: building materials such as junk or recycling, Jenga bricks, Lego bricks, building blocks or playing cards

Challenge the children to build a wall as large and as strong as possible using whatever materials you have brought with you. Make the link with the group that today’s passage is about a city called Jericho, which was surrounded by a huge, strong wall somewhat like a fortress.

You will need: a Bible

Ask the children to help you act the story out as you tell it. You may prefer to retell the story in your own words or read it   from a storybook Bible such as The Lion Storyteller Bible (Bob Hartman) or The Jesus Storybook Bible (Sally Lloyd-Jones).

Alternatively, you could read Joshua 6 from a child-friendly translation of the Bible with, such as the New Century Version.

Assign half the group to be the walls  of Jericho and stand in a circle facing outwards. Ask the other half to be the Israelites walking around the walls. You might like to choose some to be those allocated to play trumpets and have them make noise as they walk while the others remain silent. When you get to the part about the Israelites shouting, have everyone make as much noise as possible and then instruct your ‘walls’ to fall down.

After you have told the story, wonder with the group about how Joshua might have felt in following God’s instructions.  You might also like to think with the group about other ways God could have chosen   to give the Israelites the city of Jericho, and why he acted the way he did. Emphasise that the way things played out meant the Israelites couldn’t claim it was their  skills or abilities that made the walls fall down. Instead, they knew it must have been the result of God’s power.

Use the following questions as prompts for discussion. Encourage the children to think about what the passage might be saying to them and how it could be applied to their everyday lives. Try to encourage wondering, reminding them that there isn’t necessarily a single right answer.

Explain to the group that we don’t know exactly what the Israelites shouted at the wall, but we know that God commanded them all to shout. Ask if they have heard of the term ‘battle cry’, where soldiers

would shout out a phrase or slogan as they headed into battle to explain the cause they were fighting for. In modern times we might be more used to hearing chants and shouts at protests or at sports events, which send a message to the supporters and to the opposition.

Encourage the group to create a ‘shout’:  a short verse or chant, perhaps with a rhyme or rhythm that might represent the kind of things the Israelites were thinking at the time. They could do this in small groups or individually, and could either perform their chants aloud or write them down for others to read.

The walls of Jericho acted as a fortress around the city, and breaking through them might have felt like an impossible task to the Israelites as they stood facing them.

There may be things in our lives or in the lives of those around us that we want to see happen but feel are impossible. Give the children brick-shaped pieces of paper and encourage them to write or draw on them the things they want to see God do, even if they feel like these are big, crazy or impossible prayers. Encourage them to stick their prayers onto a length of lining paper to create a prayer wall.

Pray with the group for these things, then have them rip the wall up – like the walls of Jericho tumbling down – as a way of asking God to answer their big prayers. Alternatively, the group might like to keep the picture and store it somewhere, revisiting it from time to time to see which prayers God has answered. You could do both by taking a photograph of the wall to keep before ripping it up.