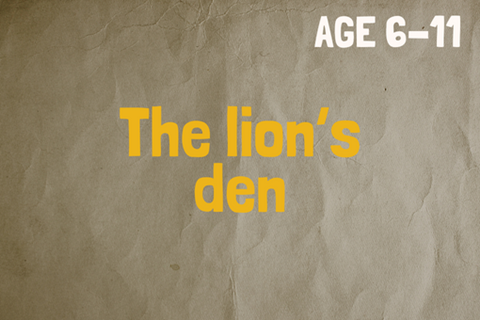 Background: By now, Daniel is an old man. He is still exiled in Babylon but remains faithful to God. The city has been conquered by the Persians and the new king, Darius, is as impressed by Daniel’s wisdom as the old Babylonian kings had been. Once again, this is a story about being true to God even when everyone else is against you. Between them, Daniel and his friends have faced threats of dismemberment, being burned alive and now being eaten by lions, yet they have steadfastly continued to trust in God alone.

As the children arrive, chat together about your week. Share about the last time you prayed, giving simple information: where you were, what time of day it was and (briefly) what you said or did to help you talk and listen to God. Invite the children to share their own prayer experiences.

You will need: items to create a lions’ den such as curtains, fabric, tables and chairs; props such as bits of tawny fur and bones cut out of white card; sand spread onto a cloth on the floor, into which you have drawn lions’ paw prints (like a hand-sized cat’s paw, plus claw marks)

Before the session, set up your lions’ den and decorate it with the props you have collected together. Make sure it is large enough for the children to go inside. Invite the children into the space you have created (don’t tell them what it is) and ask everyone to be a detective, looking for evidence. What do they notice? Wonder together about what this place might be and what seems to have happened here. Accept everyone’s answers.

You will need: your lions’ den from ‘Intro activity’

Gather the children inside the lions’ den and tell this story:

Today’s story begins at the end: in this place full of bones! But whose bones are they, and why are they here? Let’s find out what happened.

Do you remember Daniel? He was a wise man who loved God, but he was stuck working for the enemies of his people in Babylon. Now Babylon had a new king called Darius, who needed lots of help managing his new kingdom. He planned to give wise Daniel the top job; he was to be boss over everyone apart from the king himself.

The other important people in the kingdom were jealous of Daniel and plotted to get rid of him. They persuaded King Darius to pass an unbreakable new law: “For the next 30 days, it is a crime to pray to anyone except the king. Anyone caught praying will be thrown into the lions’ den by order of the king!”

Daniel heard about this law. What do you think he did for the next 30 days? Invite suggestions. Daniel kept on praying to God. Three times a day he went home, knelt down, faced toward Jerusalem and prayed out loud.

Daniel’s enemies said: “We’ve got him!” They told the king that Daniel had broken his new law. “He deserves to be thrown into the lions’ den!” they said.

King Darius was very sad. He didn’t want to have Daniel killed. He tried his best to save Daniel, but the new law was unbreakable. That evening his guards took Daniel to the lions’ den. The king said to Daniel: “May your God save you!” And he meant it.

King Darius couldn’t eat his supper or get to sleep. All night he thought about Daniel in the den with those hungry lions.

The next morning, the king went nervously to the lions’ den and called out: “Daniel! Has your God saved you?”

“Yes!” shouted Daniel. “He sent an angel to save me from the lions!” The king was delighted and helped Daniel out of the den. He made a new decree: “Everyone in my kingdom should worship Daniel’s God – he’s the best! – by order of the king.” So who do you think these bones belong to now? Invite further suggestions.

The king ordered that Daniel’s enemies be thrown to the lions, along with their wives and children! Soon, nothing was left in the lions’ den but these bones.

You will need: pens; a large sheet of paper; a red felt-tip pen

Before the session, write: “King Darius said NO…” at the top of the sheet of paper.

Explain to the group that even when praying to God became a crime, Daniel prayed. His enemies could tell that he was praying because he went home and did it out loud, three times a day, kneeling down and facing towards Jerusalem. If praying to God were a crime now, in this country, what would give you away?

Talk about the different ways we pray. Is there a particular place, time or physical position? What do we do or say that shows we’re praying? Could you pray in secret? Discuss these questions and, if it helps, create a poster together to show different things we do to pray, like the ones you see at swimming pools with a picture of each activity.

You will need: things to help children pray in different ways eg a kneeler or cushion, the Lord’s Prayer, a candle or battery-operated tea light, a holding cross or some salt dough

Introduce the different ways to pray and invite the children to choose for themselves. Begin a short time of prayer by saying: “Let us pray.” End by saying “Amen” together.