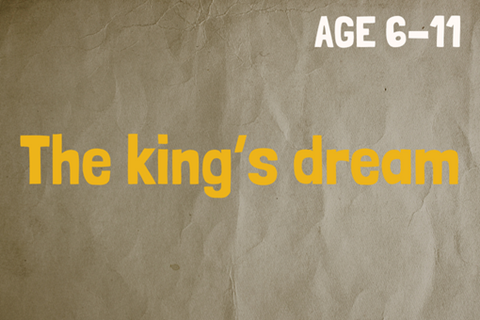 Background: The book of Daniel is set in Babylon, a hostile territory where Daniel and other faithful Jews lived in exile during the 6th Century BC. History isn’t the point of Daniel, however, his extraordinary stories are about being faithful to God in a dangerous world in which unpredictable leaders appear to have all the power.

As children arrive, chat about dreams. Who remembers theirs? Does anyone have any strange or scary dreams they’d like to share? Wonder together about whether dreams mean anything.

You will need: paper; pens; some pictures of weird animals (eg a platypus or seahorse)

Put the children in pairs. Give one child a picture of a creature, and give their partner a pen and paper. The first child’s job is to communicate to their partner what the creature is without naming it. First, try mind-reading! Then describe it carefully. Their partner should draw the mystery creature according to the description. When the drawing is finished, can it be identified? Compare the drawings with the originals.

Before the session, draw a mountain on the double-width sheet of lining paper. Scrunch this up into a ball and secure it with a rubber band. Tell this story:

Once there was a horrible king in Babylon called Nebuchadnezzar. He was so horrible that he’d probably chop your head off just for saying his name incorrectly! What was his name again? Ask children to repeat the name and see who would survive!

One night, King Nebuchadnezzar had a terrible dream. He shook and shouted for all his wise men. “Explain my dream!” demanded the king.

“Yes, your majesty,” grovelled the wise men. “Tell us your dream and we will explain it.”

“Oh no,” said the king, “that would be far too easy. You’ve got to guess! Go on – tell me what I dreamt!” So the wise men all tried to read the king’s mind. Ask children to draw their own guesses on A4 paper. What dream might have scared the king? Then share your ideas and discuss their variety!

So the king’s executioner rounded up all the wise men in Babylon. He woke up the wisest man of all, whose name was Daniel. Daniel and his three friends were faithful to God, but they were stuck in Babylon, far from home and forced to work for Nebuchadnezzar. Daniel said: “Wait! If the king will give me time I’ll explain his dream.”

Daniel and his three friends prayed all night long. They asked God, who is more powerful than any king, to show Daniel the dream and its meaning.

The next morning, Daniel said to the king: “None of us knows the answer, but God knows everything and he showed me that you dreamt about a gigantic statue!” Describe the statue and invite the children to draw the head at the top of their lining paper sheet, then fold it over and pass it on for the next stage of the drawing, like a game of consequences: a golden head, chest and arms of silver, bronze belly and thighs, iron shins and feet of iron and clay. When you have finished, unfold each drawing and admire the results. Ask a volunteer to hold up their statue.

Suddenly, a small stone smacked into the statue’s feet, smashing them to bits. Ask another volunteer to throw the ‘stone’ (the screwed-up ball of paper) at the statue and topple it.

With a terrifying groan, the statue crashed to the ground and turned to dust, but the stone that broke the statue grew into the biggest mountain the world has ever seen. Open out the ‘stone’ to reveal a mountain that blots out the fallen statue.

Daniel said: “This dream shows the future. God gave you your power, oh king, as great as gold. After yours, there will be one kingdom after another until God’s kingdom takes over. It may start off small, but it will rule the world and last for ever.”

“Wow!” said Nebuchadnezzar. “This God of yours is the greatest!” He rewarded Daniel and his friends with the best jobs in Babylon.

Chat about the Bible story using these questions.

Try to involve all the children in the discussion:

You will need: stars cut out of gold card (about 8cm wide); permanent markers

Explain that when Daniel saw and understood the king’s dream he was able to do something amazing that no one else could do. He explained that he wasn’t especially clever or wise: God had shown him the dream and its meaning. Daniel gave God the glory for the things he was good at.

On the gold stars, invite children to write or draw things they are good at. Explain that these gifts are not just limited to talents such as music or football; some people are good at understanding other people’s feelings or never giving up. Help each other by suggesting things others are good at. Chat about where these gifts come from. Do our talents belong to us? How do we use them? How can we give God the glory?

Take the children outside or, if the weather is bad, gather around an open doorway. Invite them to look at God’s world and find something that makes them say “Wow!” Natural, man-made, tiny or huge; anything from a daisy to a skyscraper could be an object of wonder.

Say: “God, the world reflects your glory. We praise you! Wow!” Then name something you have noticed.

Invite the children to take turns saying “Wow!” and noticing things. End by saying “Amen” together.