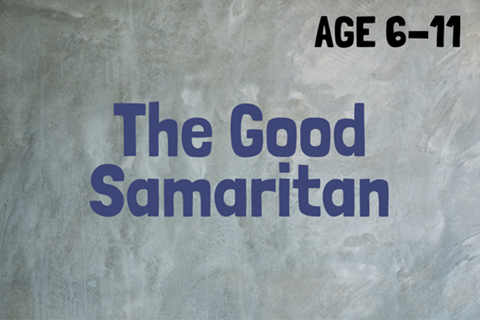 BACKGROUND: It’s easy to love family and friends, but loving people who aren’t like us is much more difficult. Take this opportunity to ask the Holy Spirit to empower us to show God’s love to those we would rather avoid.

You will need: dressing-up props for different characters, for example a police officer’s hat, paint-spattered overalls, a doctor’s white coat

Read out the following scenarios (adding your own if you wish) and ask the children to run and dress up in the clothes of the person who would be most likely to help. The first person to get there is the winner:

Ask a few children why they chose that particular person.

You will need: pre-recorded videos of story characters; a ballot box; pens and paper Before the session, record several people telling their version of the events of the story using the scripts below. The ‘Jewish man’ will need to film twice to ensure that the story is told in the correct order!

Gather the children together and start the story like this:

A man who knew lots about the Jewish law tried to trick Jesus by asking him: “What must I do to receive eternal life?”

Jesus replied with a question: “What do you read in the law?”

The man, who of course knew the law very well, said: “Love the Lord your God  with all your heart, all your soul and all your strength. And love your neighbour as you love yourself.”

Jesus said: “That’s your answer, then.”

But the man wasn’t finished trying to trick him yet. So he asked Jesus: “Who is my neighbour?”

To explain his answer, Jesus  told  a story. We are going to be hearing from all the characters involved in the story today, and then we’ll have a secret ballot to decide who you think wins the Jericho Road Best Neighbour Awards! Play the video clips in  the correct order.

Jewish man: So, there I was on my way to Jericho when I was pounced on by some robbers. They took everything I had and beat me up. Look, you might still be able to see my black eye…I was in so much pain. Then they ran off, leaving me for dead in  the middle of the road.

Jewish priest: I had very important business to attend to in Jericho with many other Jewish leaders. I don’t  like  to admit it, but I was running late and was in a hurry. Yes, I saw the man lying on the road but I needed to get to my meeting, so I crossed over the road and hurried on my way.

Levite (a temple worker): I was taking essential documents from the temple in Jerusalem to some other Jews in Jericho.   I was helping them! When I saw the man in the road I thought it was probably too late to be of any use, so I carried on. And if I’m honest, I was a bit scared too. What if the attackers came after me as well?

Samaritan: I didn’t realise he was a Jew.  I know Jews and Samaritans are supposed to hate each other. I was visiting friends but then I saw the man and I couldn’t just walk past even if he was a Jew! He was so badly beaten, but when I checked he was still breathing. So I carefully lifted him onto my donkey. I took him to the nearest inn and paid the innkeeper to look after him.

Jewish man: I didn’t know who had helped me at the time. When the innkeeper told me he was a Samaritan I was in shock! It’s changed my view of Samaritans, that’s for sure! I’m all recovered now. And next time I take a walk down the Jericho Road  I’ll take a Samaritan with me!

Give everyone a piece of paper and a pencil. Ask them to write down who was  the best neighbour and put it in a ballot   box. Count up the votes but don’t announce the result yet.

When he’d finished telling this story, Jesus asked everyone who they thought was the best neighbour. Let’s see who the Best Neighbour Award goes to. Announce the result.

Jesus challenged all his followers to be like the Samaritan.

You will need: dry autumn leaves; two large pieces of paper, one with a heart shape and one with a hand shape; glue; marker pens; music and the means to play it

Play the song ‘Hearts and hands’ by Sean Feucht quietly in the background. Ask the children to write the names of all the people they think are their neighbours on some

of the leaves. Stick these names onto the large heart shape.

Ask the children to write what actions they can take to love these neighbours on the leaves. Stick these onto the large hand shape. Spend a few moments chatting about how you might put this into practice. Chat with parents and carers after the session so that they can help their children do this.

Stand around the leaves. At the end of the song, ask the children to say the names they wrote down out loud. Pray a prayer committing these people to God and asking him to help us love them.