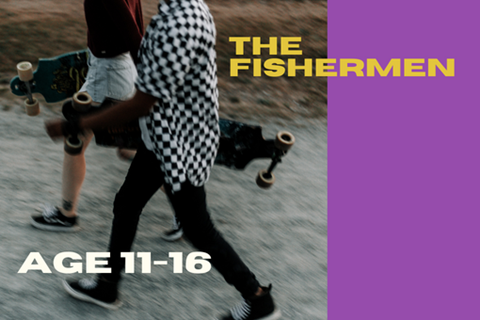 Background: This is the first of four sessions in which we will look at people Jesus met. Here, Jesus meets the fishermen; ordinary, everyday people who weren’t special or privileged in any way.

As the young people arrive, encourage discussion about why some people are seen to be more important than others. You can prompt them by suggesting people such as politicians, sportspeople and royalty. What makes a celebrity? The discussion could be expanded to include those who are famous on social media. How do they achieve that?

Make sure the group understands that although these people may be considered important, they are no different from anyone else.

In twos or threes, ask the young people to discuss and create their ultimate team. It doesn’t have to include real people, although if they choose a football team real players are a bonus. This could be a sports team, political cabinet or business collaboration. They should consider who they would want in their team and why.

Let the small groups feedback their team ideas to the rest of the group and explain why they chose each member.

Use the following sketch to tell today’s Bible story. If you have time you could rehearse and perform it, or just ask some volunteers to read it through. You will need volunteers to play an official, a person in the crowd and Peter. Everyone else can be part of the crowd.

Official: I say, what a commotion! What on earth is going on here?

Person in crowd: It’s this guy, Jesus. He’s talking to everyone.

Official: Talking to people? This crowd is blocking the road. I have a job to do, you know. I’m very important. I run the local Gennesaret council. I’m a politician, you see.

Person: Well, I wouldn’t say that too loudly, you don’t want this crowd getting upset. It wouldn’t take much for them to get angry about all these potholes.

Official: Coughs in embarrassment. Well, these people can’t block the roads even if they do have potholes. What’s he saying?

Person: He’s telling them about God and stuff. He’s one of those preachers.

Official: A preacher? I hope he’s got one of our official God Squad Certificates or he’ll have to pipe down.

Person: He’s getting into one of the fishing boats now and talking from there.

Official: Ah, that’ll sort him out. I bet the fishermen are having a right old moan at him. They certainly do when they come to see me. It’s not my fault they can only fish at certain times of the year. It’s the Gennesaret by-laws, you know.

Official: In daylight? They’re only supposed to fish at night!

Person: Woah, that’s amazing. They’ve caught some fish. I came down here earlier to get some for my lunch and they told me they hadn’t caught any. Now they’re using two boats to bring all them in!

Official: What?! What about the fishing quotas? What about health and safety? Two boats? That’s got to be illegal. Walks up to Peter. Excuse me, but I’m very concerned with what has been going on here. I am an official from the Gennesaret Local Council, and I am sure that several rules have been broken this morning. Why are you smiling?

Peter: I’m sorry. We didn’t mean to block the roads, and as for the fish, well, that’s all down to this amazing guy called Jesus. Although I don’t think he’s any ordinary kind of guy.

Official: What do you mean? Who is this Jesus? And what am I supposed to do about all this kerfuffle?

Peter: Here, have a few fish. We have plenty. And you really don’t have to worry about things quite so much.

Official: Well, as you say, it is a nice day. And I wasn’t really listening to what this Jesus chap was saying. Do you think you could fill me in on what he was talking about?

Peter leads the official away, telling him about Jesus.

When you have finished the sketch, read Luke 5:1-11 to the group.

Use these questions to discuss the story further:

You will need: art materials

Encourage the group to draw some simple fish outlines on a piece of paper. Explain that Peter realised Jesus was holy. Peter responded by seeing himself as unholy, or sinful. Invite the young people to fill the fish with words or images that relate to how they feel about Jesus. Explain that what they draw will not be shared or shown to anyone unless they want to. This is, initially at least, a private response to the Bible passage.

Ask if anyone wants to share and explain why they have written or drawn what they have, but reassert the fact that sharing is optional.

Explain that, despite the fishermen being unable to catch any fish when they tried, things changed when Jesus got involved. When the fishermen and Jesus worked together they got a result.

When we pray, we are working with God. We involve him in things we worry about, things that concern us and things we would like to see changed. Invite the group to pray about these things quietly now.