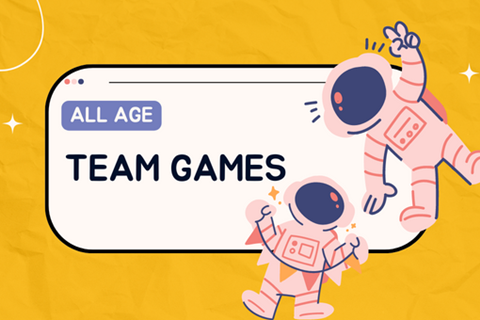 Last month, we looked at up-front games where volunteers competed in a challenge in front of the rest of the children or young people. This month, it’s team games! You can use these as part of ongoing competitions (for example at a holiday club or residential) or just for fun.

You will need: matchboxes or other small boxes; catapults; ping- pong balls; chalk or masking tape

Split the group into smaller teams and mark out a circle on the   floor for each team. They should be about three metres apart. Give each team the same number of matchboxes and challenge them    to build a tower with them inside their circle. Then give the teams catapults and ping-pong balls. The teams have to fire ping-pong balls at the other teams’ towers in an attempt to knock them down, but they have to stay inside their own circle. They are not allowed   to block incoming balls.

The winner is the team whose tower is the last one standing.  If the game is going on for longer than it needs to, call a halt and declare the highest tower the winner.

You will need: table; cup of water; coins

Place the table in the middle of your space and put the cup of water in the middle of the table. Line the teams up fanned around the table; each team should hold hands along the line. A leader with a coin stands at the opposite end to the table, one leader per team.

The leaders toss their coin. If it’s heads, then the team does nothing. If it’s tails, the player nearest the leader squeezes the hand of the next player and so on. The squeeze travels down the line    until it reaches the player next to the table. They grab the cup and throw the water over one of the other teams!

Refill the cup and play again. You might want to rotate the players in each team, so it’s not always the same player standing next to the table (and so getting wet!). You might want to keep   track of which team wins each round to come up with a final score.

You will need: newspaper; chalk or  masking  tape;  stopwatch Before the session, screw up the sheets of newspaper to make  small snowballs. Divide your playing space into two using the chalk or masking tape.

Divide the children or young people into two teams and sit them down on the floor, either side of the line. Spread out the newspaper snowballs equally on each side. Challenge the teams to throw all  the snowballs onto the other side of the line. Play for a minute; at the end of the time, count up how many snowballs are on each   side. Declare the side with the fewest snowballs on their side the winner. Make sure you recycle the newspaper after the game.

You will need: eight bean bags in two different colours (four of each); chalk or masking tape

Mark out a large noughts and crosses board on the floor at one   side of your space. Split the children or young people into two  teams and line them up at the other side of your space. Give each team four bean bags of the same colour. At the signal to start, the first person races to the board and places one of their bean bags in a square, then runs back to their team. The next player runs up and either places a new bean bag onto the board or moves a bean bag already on the board to a new square.

Play continues this way until one team gets three in a row. They are the winners. Play the best of three if the group is keen.

You will need: large sheets or paper or white boards; thick marker pens or whiteboard markers; list of famous people, places and things Split the group into teams and give each one a white board or  some large sheets of paper, together with some pens. Ask all the players to take their shoes and socks off.

Ask the first players from each team to come to you. Show them the top name on your list of famous people, places and things. They have to go and draw that for their team to guess, but using their feet!

Once the team has guessed that person, place or thing, the second player comes to you to be shown the next name on the list. Keep going until one team has made its way through the list.