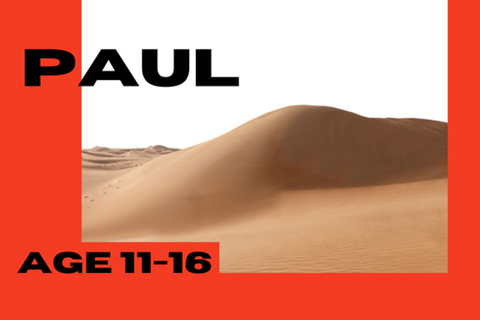 MEETING AIM: To see how God works through secular culture.

BACKGROUND: These sessions are designed for you to do online in a group video call (on something like Facetime or Zoom). Make sure you have parental permission to do this, as well as following your church’s safeguarding procedure (see p13 if you need more help). As with your usual sessions at church, make sure you have at least two leaders online.

Paul and Silas are in Philippi, part of a Roman province in Greece that adheres to Roman law. Although there are Jewish people living there, the majority of the population is not Jewish. There are so few Jews that it has no synagogue. Divination was big business in the area at this time, for example at Delphi. People would go to ‘fortune tellers’ for all manner of things. It was part of everyday life.

As people join you online, ask them to share what they have been doing during the past seven days. Encourage them to share both the positives and negatives, but be aware of any situations that may upset anyone.

Before the session, ask everyone to message you a unique fact about them that no one else in the group will know. Read out these facts one at a time and, after each one, the group should try to guess who the fact is about. A twist on this is that you could allow the group to write a true or false fact and then the group have to decide who and then whether it is true or not.

Make sure everyone has access to a Bible or Bible app. As each section is read out, invite the group as a whole to discuss how each of the characters feel. Encourage them to be open with what they say; there are no right or wrong answers.

Read Acts 16:16-18. After discussion, ask: “How does the girl feel?” There is no reason to believe that the girl was referring to the God of the Bible. Her comment is likely to refer to any god. However, Paul does respond with the name of Jesus.

Read Acts 16:19-21. After discussion, ask: “How do the slave girl’s owners feel?” The minders invoke prejudice and truths to protect their livelihood. Paul isn’t one of us and he is acting in a way contrary to us. Similar arguments are still used against different cultures and people.

Read Acts 16:22a. After discussion, ask: “How do the crowd feel?” The people join in, as with many arguments involving prejudice.

Read Acts 16:22b,23. After discussion, ask: “How do the magistrates feel?” They want to keep the peace. Following Roman law was vital in Philippi and they thought Paul was an outsider.

Read Acts 16:24-27. After discussion, ask: “How does the jailer feel?” The jailer was responsible for the prisoners. He assumed that they were all gone and that he would be killed for their escape.

Read Acts 16:28-34. After discussion, ask: “How does the jailer feel now?” The jailer’s original call for salvation was more to do with sorting out the situation with the prisoners. However, Paul leads both the man and his family into the love of Jesus.

Read Acts 16:35-40. After discussion, ask: “How do the magistrates feel?” Paul turns the magistrate’s original response on its head. They now find out he isn’t an outsider but a Roman citizen. As they want to uphold Roman law, they now realise what a mistake they have made.

Continue your exploration of the Bible story by discussing these questions:

•Paul was privileged – he was a Roman citizen, which gave him certain rights. Who are the privileged today?

•Paul used his privilege to spread the gospel of Jesus. Are there any positive things you can do if you belong to a privileged group?

Before you start this activity, make sure everyone has a couple of sheets of A4, some scissors and some sticky tape (or a stapler). They should cut the paper into strips about 2cm wide. Ask the group to think about areas of their life where they feel they live it more the way the world wants than the way God wants. They should write these on the paper strips.

Once they have written on several strips, they should stick and loop them together to make a simple paper chain. Ask the young people to put their hands through loops of the chain as if they are wearing handcuffs. Make sure that you are taking part in this activity as well.

As a symbol of the earthquake, let the young people pull their arms apart and break the chains. Explain that as we trust in God anything that stops us fulfilling our role in God’s plan can be overcome and broken just like paper chains.

You will need: chains from ‘Creative response’

Close the session with a time of open prayer. Encourage the young people to ask God to help them in their lives, to follow God’s plan for their lives and to keep them safe as they do it.

Ask the young people to gather the broken paper chains together and rip them into tiny pieces so that the words and images on them can’t be seen or read. Close by asking God to bring us closer to him in everything we do.