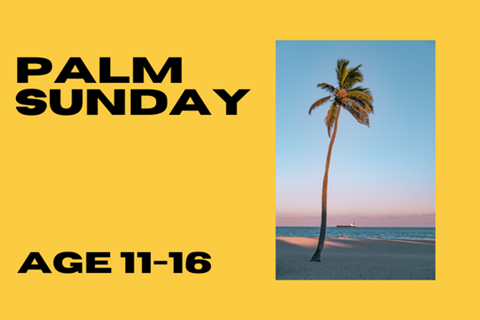 BACKGROUND: Jesus’ arrival in Jerusalem at the start of what we now call Holy Week is an outrageous, expectation-defying event.

Jesus was clearly signifying the kind of Messiah he was going to be – not the conquering hero that many were expecting, but a  servant king riding on a donkey. Help the young people in your group to approach this story ready to find out more about who Jesus is, rather than who society says he is.

Welcome the young people and share out any refreshments you have brought. Chat together about what has happened this week. Rejoice in the young people’s triumphs and sympathise with their difficulties. Use this time to build relationships and settle into the session.

Split the young people into teams (or work together if your group is smaller). Each team should create the best ‘donkey’ in five minutes. The donkey can consist of one or two team members, plus a costume made out of the bin bags and newspaper.

After five minutes, ask your ‘donkeys’ to parade around – the designs should be judged both on artistic merit and ability to hold together. Award a prize to the team with the best ‘donkey’ (and recycle the costumes as much as you can).

You will need: large sheets of paper; felt-tip pens; Bibles

Ask the young people if they are good at drawing. Ask those people with their hands up to find a non-artistic partner. Challenge each pair to come up with a new superhero – a person with superhuman abilities capable of saving the world. If time allows, they could also create a vehicle for their hero.

Invite each pair to show their hero to the group; then display the drawings around the venue for the rest of the session. Talk about how the people of God were expecting someone like a superhero. Some were waiting for a great military leader who would overthrow Roman rule and restore their nation to international dominance. Instead they got a rabbi on a donkey. God’s idea of a superhero is not the same as ours.

Draw the group together, and hand out Bibles to those who need them. Then read Mark 11:1-11. Ask the group what they notice from the passage. Which bits leap out particularly? Draw their attention to some of the more striking, even strange, moments in the reading.

Invite everyone to find a space and explain that you’ll be doing an ancient monastic approach to reading the Bible. Ensure the room is quiet. Encourage everyone to focus on their breathing, then on the noises within the room, then on the sounds outside it.

Read the story again; the young people should imagine they’re actually there in the story, as Jesus’ disciples. Read slowly, and pause between verses, feeling free to ask prompting questions like “What can you see?” and “How does this make you feel?” Invite them, within their imaginations, to explore the story in three dimensions, using all the creative power of their five senses. What is going on around them, and what does it mean to them? Most importantly, what do they see of, and learn from, Jesus?

When you reach the end of the passage, start again, but this time they should imagine that they’re members of the crowd. Ask the group to feed back on what they felt, saw, and perhaps experienced of God though taking part in it.

Finish this activity by saying that the opening act of Jesus’ history-changing week is important because it establish- es who he is – humble yet worthy of worship; a powerful king yet not the kind of messiah who was expected. The way that those around him perceived him is crucial to the developing story.

You will need: images of Jesus on card or paper (choose various images, eg film portrayals, classic works of art) – enough for at least one each

To finish, provide a selection of images of Jesus. Invite everyone to spend some time in silent prayer with one or more images, asking Jesus to make himself more real to them today and in the weeks ahead.

If you’re running all four sessions on Easter, choose a movie that illustrates the various episodes covered by the session plans. The clip should be the moment where the main heroic character is introduced. For example, you could choose The Lion King and watch the opening shot as Simba is held aloft; the scene where Princess Leia is under attack in Star Wars IV: A New Hope; the original Toy Story, when Woody comes to life or when Buzz arrives. Ask the group what they notice about how the main character is introduced. What do they learn about them? How does this introduction setup the story?