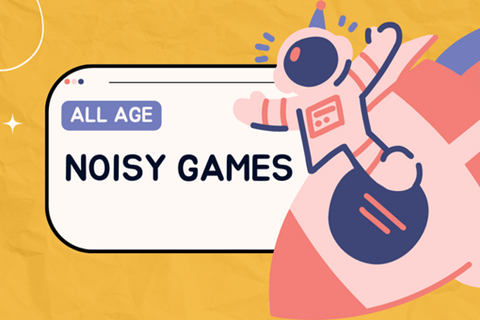 Easter is a time of celebration, so why not play some of these noisy games to celebrate! They are ideal for playing at club nights or after-school clubs where you don’t have to worry about disturbing other groups.

You will need: cards with words that often appear in song lyrics, such as love, life or light

Split the group into two or more teams. One team should take a card and read out the word. That team should start singing a song with that word in the lyrics. After a couple of lines, the next team should sing a different song with that word in it. Play continues until a team can’t think of a song to sing. That team keeps that card and draws another. Keep playing until all the cards have been used. The winning team is the one with the fewest cards.

OUT FOR THE COUNT

You will need: chairs (one per person)

Sit in a circle and count the number of players, say ten (this is good with a larger group). Players randomly stand up and shout out the numbers from one until you get to ten. Players can only say one number and must stay standing up once they have spoken. The person to shout the last number is the loser.

If two players stand and shout at the same time, they are out (and so the ‘final’ number is reduced by two). The loser and any players who are out get a point. Keep playing and at the end of your time, the player with the fewest points is the winner.

KING OF THE JUNGLE

You will need: chairs (one per person)

Arrange the chairs in a circle and designate one chair as the lion chair – the king of the jungle. Choose a player to sit in that chair and ask them to do an impression of a lion, with actions and sound. The other players sit down; each one has to think of an animal and come up with an action and sound for their animal. Each player should demonstrate their action and sound, so that everyone can see it. The lion is the king, and the other players are ranked going around the circle to the lion’s left (so the player to the lion’s right is the bottom of the heap!).

The lion starts the game, doing their lion impression followed by the action and sound of another animal in the circle. The player with that animal does their action and sound, followed by another. Play passes around the circle in this way until a player hesitates, misses their turn or gets an action or sound wrong. This player goes to the bottom of the heap and everyone moves up. The players move around the circle, but the animal actions and noises stay in the same place. So, as the lion starts the game again, some players will have a new animal action and sound. The aim of the game is to become the lion – the king of the jungle.

You will need: a list of objects that can be found in your venue

A classic that doesn’t seem like it will be noisy, but competitiveness always gets the better of children and young people, resulting in a cacophony of shouting! Split the group into four teams and send the teams into different corners of the room, while you stand in the middle. Shout out: “Bring me a…” followed by the first thing on your list. The teams should send one person to you with that thing. The first person to get to you wins their team a point. The team with the most points at the end of the list is the winner.

Simple? Well, you’ll need to have referees to solve disputes and make sure that fights don’t break out over various items. And avoid asking for a person (“Bring me the vicar.”) as they will inevitably get mauled by the teams.