By Jenny Cheung is a schools’ worker with Scripture Union Scotland, leads the children’s team at CLAN Gathering (New Wine Scotland) and is a volunteer on a youth residential for Scripture Union England and Wales. 2017-11-23T00:00:00+00:00 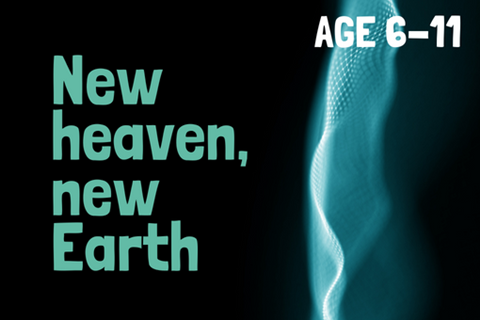 Background: The Bible culminates with a technicolour vision, given to John, which charts the end of the world as we know it and a continuation on into the perfection that God always intended for his people. After messages to specific churches and some dramatic and detailed descriptions of the battle between good and evil, John paints a picture of what the new heaven and new Earth will be like.

As you begin the session, invite the children to sit together in a circle and pass around a simple object. When a child has the object, they can share their response to the question. Sometimes it’s helpful to have a sand timer so that you have time for each person to share if they want to. If a child doesn’t want to say anything they can just pass on the object. Ask the children to talk about the best place they’ve ever been.

You will need: large paper circles (about 10cm in diameter); felt-tip pens

Share out the paper circles and ask the children to draw lots of different emojis. After a few minutes, ask what emojis that depict death, sadness, crying and pain might look like.

You will need: large versions of the emojis depicting death, sadness, crying and pain; a red marker pen; the Greek letters A (alpha) and ? (omega) written on paper; a jug of water; an empty bowl

Ask the children how they felt about making miserable emojis. It’s not nice, is it? But we know that there are lots of things about our world that aren’t nice.

Say: When God created the world, he meant for it to be perfect but human beings have spoiled it by not loving God, one another or the world well. That’s why Jesus came - to put things right.

When Jesus died on the cross and rose again, it was to show that he takes on our bad choices and actions and makes us perfect again so that we can live with God for ever. But there are still bad things in the world, aren’t there? People die, or are sad or hurt. God promises in the Bible that he is going to fix all of this and create a wonderful new place for us to be with him for ever.

There’s a book called Revelation, which is a picture that God gave to a man called John of what it’s all going to be like. In the book, Jesus says that there will be no more death or sadness or crying or pain in the new world. Take each of your emojis and draw a big red line through them, like a ‘no entry’ sign. Jesus says he’s going to make everything new!

Jesus also says he’s the Alpha and Omega. What does that mean? Alpha and omega are the first and last letters of the Greek alphabet. Show the letters. Jesus is saying that the story started with him, right at the very beginning when everything was made, and it ends up with him too: he’s going to be king over this new heaven and Earth.

Then Jesus says that he has living water to give to all of his people. Pour the water from a height into the bowl so the group can see its sparkle and shine. This water will give us life for ever with him.

Jesus also says that you don’t have to have any of these things if you don’t want them. If you would rather carry on going your own way and not choose to follow him, you can do that but you won’t be able to be in this amazing new place with no bad things and the water of life.

Jesus says everyone is invited to have the water of life and be with him for ever. All you have to do is say: “Yes, I’ll follow you, Jesus!”

Ask the children to draw a happy emoji face on their circle to show how people will feel in the new heaven and new Earth with Jesus. If you have a laminator, laminate them and cut them out before sticking a pin on the back and wear them as badges.

Get the group to find a spot to lie down in where they won’t be distracted. Invite them to close their eyes.

Using a child-friendly version of the Bible (try the International Children’s Bible or Contemporary English Version), read Revelation 21:10-12 and 22:1-5 slowly and ask the children to paint a picture of this with their imagination.

At the end of the reading, ask the children to imagine having a conversation with Jesus in this amazing place. What do they want to say? What do they think he would say to them?