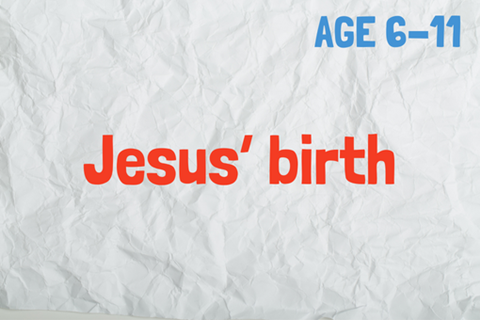 Background: God has chosen an ordinary Jewish girl to give birth to the promised Messiah. Israel is under Roman occupation and, just as Mary is ready to give birth, she and Joseph have to travel miles to Joseph’s home town to be counted.

As you begin the session, invite the children to sit together in a circle and pass round a simple object. When a child has the object they can share their response to the question. Sometimes it’s helpful to have a sand timer so you have time for each person to share if they want to. If a child doesn’t want to say anything they can just pass on the object. Ask the children to share about the most difficult journey they’ve ever been on.

You will need: Bible atlas or Bibles with maps (or maps downloaded and printed from the internet)

Show the children the Bible maps you have brought. Ask them to look at the map and point out any place names they recognise. Ask them which are the important place names for the Christmas story. Have a look at where Nazareth is, then find Bethlehem. See how far apart they are. Wonder together about how long it would take to travel from Nazareth to Bethlehem. If you have access to a smartphone map app, use it to find out the distance and travel time.

You will need: a Roman helmet; a donkey mask; access to an up-to-date NIV Bible

By this point in the story, Mary and Joseph are married but Mary hasn’t had the baby yet. She’s very pregnant, though! Talk about what it’s like to be pregnant. It’s not that comfortable by the end! Ask if anyone knows what’s going on in Israel at this point in history. Who is in charge? It’s the Romans. Put the Roman helmet on someone. Then tell this story:

The head Roman at the time was called Caesar Augustus, and he decided to find out how powerful and rich he was. The way to do this was by counting everyone. That’s called a census. Nowadays we do a census by filling in a form online or on paper and sending it away. Back then you had to go to the place you were born to be counted.

Mary and Joseph lived in Nazareth, but that wasn’t where Joseph was from. Who knows where he was from? They can work this out from their knowledge of the story. Mary and Joseph had to travel to Bethlehem, which was 70 miles or so away. They didn’t have cars, buses, trains, planes or even bikes, so how did they travel? They will probably suggest a donkey. We always put a donkey in the Christmas story and they might have used a donkey, but it’s not actually in the Bible. Give someone a donkey mask to wear. When Mary and Joseph got to Bethlehem it was super busy. Loads of people were there to be counted and it was going to be difficult to find somewhere to stay. So what happened next? You’ll probably get the answer that Mary and Joseph had to sleep in a stable because there was no room at the inn.

Have a look at the most up-to-date version of the NIV. Point out that it talks about there being no ‘guest room’. It’s likely that Joseph had family in Bethlehem. His family wouldn’t have turned him away, but they might not have had a nice guest bedroom available as the house was probably already full of visitors. Houses in the Middle East at the time had downstairs rooms where you could bring your animals in at night, and it might have been there that Mary and Joseph stayed. So when Mary had the baby she put him in manger – where the animals usually ate – because that was a good size and shape for a baby when there were no other options.

You will need: small flat stones (pale ones if possible); small boxes that can hold about eight of the stones; permanent markers; hay

Over the next three sessions you’re going to make a stone nativity scene. Put a little hay into the box, then as you decorate the stones you can place them inside. In this session, use the markers to decorate a stone to look like Mary, one for Joseph and a small one for Jesus. If you want to, you can add an angel and a Roman for context. As you work, chat about the story and what the children think God is saying to them. If you can’t get any suitable stones, you could form some flat pebbles out of air-drying clay a few weeks in advance so they are dry enough to be drawn on. Or you could make salt-dough pebbles and bake them in the oven ahead of time.

You will need: boxes from ‘Creative response’

Sit with your box of stones. One by one, take Mary, Joseph and Jesus and hold them each in your hands. Thank God for everything you can think of about their part in this story.