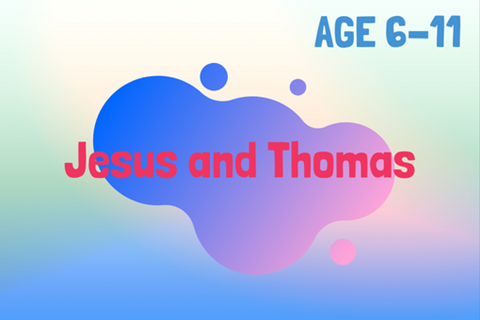 Background: Doubting is a normal part of the Christian faith. As we see Jesus answer our prayers and spend time with him, we grow in our faith. This session allows the children to safely explore and voice their doubts.

Welcome the children by name as they arrive and invite them to join your circle. Share out your refreshments and discuss the latest superhero or action film. Compare the heroes in different films. Which one is the best?

You will need: pictures and brief descriptions of Robin Hood, King Arthur, Atlantis, the Loch Ness monster and Bigfoot (add your own if there are some local stories or legends); a chart with two columns (one with each legend’s name and the other headed “Real of fake?”)

Explain what ‘legend’ means. Invite the group to go on a ‘fact-finding mission’ around the room, looking at all the information provided. Give each child a chart and challenge them to decide whether the character is real or fake.

Before the session, blow up the gloves and secure the ends. Hide these around the room along with the keys and nails.

Give out the bingo sheets and challenge the children to listen out for the following words in the story.When they hear the words ‘key’, ‘nails’ or ‘hand’, they have to go and find that item before crossing it off their sheet. Go on to tell this story:

Hi there, my name is Thomas. You may have heard of me before. Some people call me ‘Doubting Thomas’. I know why, but I don’t think it’s very fair. I just like to see stuff before I can believe it, that’s all.

I can only tell you the first part of my story because others have told me about it. My mates, the rest of Jesus’ squad (otherwise known as the disciples), won’t stop talking about it!

After Jesus died, we were all pretty freaked out. Scared was an understatement. We thought the Jewish leaders would be coming for us next! Three days later, the squad had locked themselves away in a room so that they wouldn’t be found.

Apparently, while they were all hiding away, Jesus walked right into the middle of the room. I mean, Jesus, who was dead! Walking. Unbelievable! He showed them his scars and they just couldn’t believe their eyes. But they did. Believe their eyes, I mean.

I mean, how could I? I know Jesus did some unbelievable and impossible things when he was with us, but this was just a step too far. Coming back to life after that kind of awful death? I thought they’d gone crazy.

That is, until a week later. We were hiding again. I’d locked the doors with the keys. I knew those doors weren’t going to be opened without that key. We were safe. Or so I thought.

Without even unlocking and opening the door, Jesus appeared in the middle of the room!

Woah. I’d seen some crazy things, but this topped it all. I didn’t know what to say. Thankfully, Jesus did.

He showed me his hands. They had holes in them. He told me to put my finger right into the holes. I regretted my words then! Then he showed me the hole in his side where the spear had pierced him. Almost my whole hand went in there! That was one of the most horrible things I’ve done. But Jesus told me to stop doubting and believe.

I was speechless and totally amazed. The only words I could squeak out were: “My Lord and my God!”

It really was him. He had actually come back to life. The rest of my squad looked pleased with themselves, and I heard a few of them muttering: “I told you so.”

Jesus spoke to me again then: “Because you have seen me, you have believed,” he said. “Blessed are those who have not seen and yet have believed.”

Well, I couldn’t imagine not seeing Jesus and believing in him, but I guess that’s where you guys come into the story…

Chat about the story using these questions:

You will need: wax candles; watered-down paint; sheets of white paper or card

Invite the children to respond to this story by thinking about what they want to say to Jesus. Is there something they need help to believe? Perhaps they need to see an answer to prayer.

Ask each child to write their message to Jesus on the paper with the wax candle. Then show them how to paint over the paper, revealing the words.

You will need: paintings from ‘Creative response’

Divide into pairs or threes. Invite the children to pray for one another using the secret messages for inspiration.