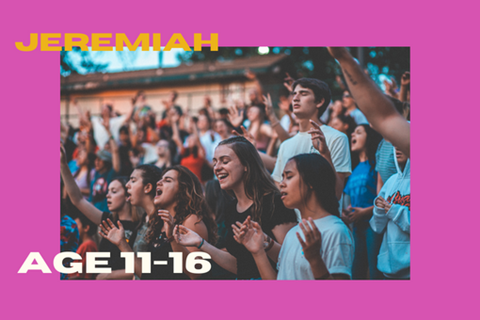 BACKGROUND: Jeremiah was hated for what he said and ridiculed for who he was: a prophet who listened to God. Jeremiah was only doing what God had told him. However, other people didn’t like hearing what Jeremiah, or God, had to say.

In response, Jeremiah hated himself.

His very being as a prophet brought him shame. By being angry at himself, Jeremiah was also angry at God. In this session we will explore anger toward God.

Welcome the young people by name and share any refreshments you have provided. Invite the group to share what they have been doing over the past seven days. As they share, ask them how their week has gone. Has anyone faced any issues from others because of their faith, for example being teased or bullied? As with all these sessions, be pastorally aware of the situations your group may be dealing with, and be ready to offer support.

Before the meeting, do some research on the following predictions and events from history: nuclear war between the West and the Soviet Union, the bird flu epidemic and global warming. For each situation you will need to have a basic idea of the event, what actually happened, and how the respective governments and people responded.

Invite discussion around each of the predictions in turn, asking the group what they know about these situations and the outcomes.

Make sure the point is made that for at least two of the predictions the worst-case scenarios failed to be realised (there was no nuclear war and no bird flu epidemic). However, in all the scenarios the govern- ments had to act, and in general the people were concerned about what might happen.

Explain that there are similarities between these predictions and the proph- ecies Jeremiah gave in the Old Testament.

The leaders of the day responded, as did the people. Unfortunately, it was Jeremiah who faced the consequences, at least initially.

You will need: printouts of Jeremiah 20 (one for each person); pens; highlighter pens; Bibles

Give out copies of Jeremiah 20 and encourage the young people to read it on their own.

Explain that this is the fifth lament of Jeremiah. A lament is a style of prayer or psalm used when things are bad. Yes, it is the fifth time that Jeremiah is saying “woe is me”. It is no surprise that he is seen by many as a misery! However, he is basically a realist. He says things as they are, and it is for this reason that people don’t like him. The whole point of prophets in the Old Testament was to turn people back to God by saying: “If you don’t change your ways, this will happen.” But the people didn’t want to change their ways and they didn’t want whatever ‘this’ was to happen either.

Either alone or in pairs, ask the group to read through Jeremiah 20 and mark in pen or highlighter which parts of Jeremiah’s lament are positive and which are negative. Which parts seem angry toward God and which parts praise him?

Once they have done this, get some feedback from the group and see if any areas of agreement emerge. Discuss any areas of dispute or uncertainty.

Point out that Jeremiah is angry at God because it was God who had chosen him  to be a prophet. The rejection Jeremiah suffers as a result of the prophecies he delivers leads to the shame he feels. It is then that he wishes he didn’t exist. Despite all this, there is still an acceptance that God is great. There is raw emotion and anger,  but this doesn’t lead to a loss of faith.

Ask the group to look at Psalm 22. As they read through it, let them compare the words in the psalm to Jeremiah’s lament and then share what they find. Tell them that this psalm is the one Jesus uses on the cross. Jesus also cries out to God.

There is nothing wrong with crying out, even in anger, to God. He is not only there for the good times…just ask Jeremiah.

Use the following questions to encourage the young people to share how they feel about the themes found in this passage:

You will need: paper; art materials

Make sure everyone has access to Psalm 22:1–11. Explain that this psalm is very similar (it is a lament psalm) to the words Jeremiah used. The beginning of it was used by Jesus when he was on the  cross.

On their own, encourage members of the group to rewrite the psalm in their own words, expressing the emotions and feelings it contains in modern language. Using the  art materials provided they can decorate their words to visually express the meaning. Give any reluctant writers the help they need to do this. If they would prefer not to write they can draw a picture that illustrates the same sentiments as the psalm.

If anyone wants to share what  they have written allow them to do so. However,

these are likely to be personal so don’t push anyone to share.

Close with a time of open prayer. Encour- age the group to be honest and  open  in the way they pray. If they need and want to

they can use the words from their rewritten psalm or some of Jeremiah’s words.

End with the following:

Thank you for being there.

Thank you for letting me be honest. Be with us as we leave this meeting.

Be with us through the good times and the bad times.