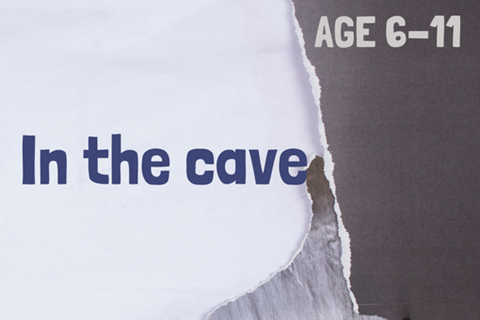 Background: Israel is fighting the Philistines. Saul is king of Israel, anointed by the prophet Samuel, but God has already chosen David to replace him. David is married to Saul’s daughter, best friends with Saul’s son, and has proven himself a better soldier than King Saul. Saul is jealous and repeatedly tries to kill David, who escapes into the desert. Saul pursues him in a murderous game of hide and seek.

You will need: blankets

As the children arrive, invite them to snuggle under the blankets. Chat about how this makes everyone feel and talk generally about what makes them feel safe. Their own bed? A big hug? A cuddle with a pet?

You will need: blankets from ‘Circle time’; den building materials such as chairs, tables and a rug (indoor), or stout branches, leafy twigs and a ground sheet (outdoor)

Explain that today’s story takes place in a deep, dark cave. Challenge the children to build a cave or den that is big enough for all of you to sit in. Make it as dark as possible. Consider doing this outside if you are able to and the weather is fine.

You will need: torches and camping lanterns; your ‘cave’ from ‘Intro activity’; a royal-looking robe and a crown

Sit in a circle inside the cave, turn on the torches and explain that you’re going to begin today’s story by playing a game. Put the robe over one child’s shoulders and say: “You are King Saul.” Put the crown on another child’s head and say: “You are David, the boy who will be king.” Explain that King Saul is jealous of David and wants to kill him. In this game he does so by pointing at him. Ask the two chosen children to demonstrate and encourage dramatic dying! Then introduce the catch. You will be playing this game with your eyes closed so King Saul doesn’t know where David is.

Everyone closes their eyes. Place the robe on one child (David) and crown (Saul) on the other. Still with eyes closed, ask King Saul to point wherever they think David is. Everyone opens their eyes to see if David has been located. If so, he ‘dies’; if not, repeat the game.

Everyone closes their eyes. Place the robe and crown on different children and tap the shoulders of a couple more. Still with eyes closed, ask King Saul and the Philistines to point. Everyone opens their eyes and dies if they have been pointed at. If David is not yet dead, repeat the game again. Then tell the following story.

Our story begins with this deadly game of hide and seek in the desert. Jealous King Saul is trying to kill David, the boy who will be king, and the Philistines are trying to kill them both!

Give someone the crown. David finds a perfect hiding place. He and his soldiers crawl into a cave. So, here we all are, wondering when it’s safe to come out. Encourage everyone to huddle together and turn the torches off.

I wonder where King Saul is? Give someone the robe and ask them to stand apart from the group. Sshh! There he is! He’s just come into the cave, all on his own, and he doesn’t know we’re here. What are we going to do?

Let’s press PAUSE and think about this. What might David do now?

Turn the torches on and discuss David’s options together, then turn them off again.

Here’s what David does. He creeps forward in the dark and cuts off the corner of King Saul’s robe without him noticing. That’s it – nothing else! He whispers to his soldiers: “God chose Saul to be our king. How could we hurt him?”

Then Saul leaves the cave and David follows.

“Your majesty,” says David, bowing before Saul. “I’m not trying to hurt you. Look, I could have killed you just now. I came this close!” David shows Saul the corner of his robe he has cut off. “But I could never hurt God’s anointed king.”

King Saul bursts into tears and says: “David! I know you’ll be a better king of Israel than me. Just don’t kill my family when I’m gone.”

David promises not to harm them and Saul goes safely home.

Use these questions to chat about the story:

You will need: building blocks and play figures (eg Lego or Godly Play)

Ask the children to create a scene from the story and discuss what they are imagining as they do so. Be available to chat to the children as they create.

You will need: printouts of Psalms 57 and 142 (including each psalm’s subtitles) in an accessible translation

Explain that David asked God for help when he was in the cave. He wrote prayers that we can still read in the Bible today in the book of Psalms. Invite the children to read the psalms and pick out some words that could become their own prayer or a prayer for someone else.

Encourage the children to pray for themselves (or someone they know), especially if they are in a deep, dark place, like David in the cave. Emphasise that they can always ask God for help. Take turns sharing the lines you have chosen, then say amen together.