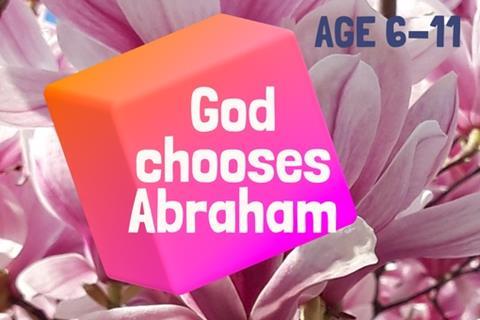 Background: Abraham and his family lived in the Middle East around 4,000 years ago, at a time when people believed in many different gods. Sometimes they settled for a while and farmed, and at other times they travelled with their animals to find new grazing land. Abraham was originally called Abram. God gave him his new name as part of his promise to him, but to avoid confusion these sessions will always refer to him as Abraham.

As the children arrive, chat together about what they have done with their friends during the week. You might like to talk more generally about how we choose our friends. What makes you want to be friends with someone?

You will need: a chess set

Invite children to choose a chess piece and explain their choice. Children who know nothing about chess may prefer the look, feel or colour of one piece. Encourage any who are chess players to talk about what their chosen piece can do and what its ‘special powers’ are, such as moving diagonally.

You will need: a simple crossroads on the floor, marked with masking tape or chalk; a card with God’s words (see ‘Speaking activity’ below); art materials

Gather the children together and tell the following story:

Back at the beginning of the world, people chose gods to worship rather like we chose the chess pieces. Some worshipped statues, some worshipped animals, and some worshipped kings or goddesses. We’re going to tell the story of how one man chose to believe in the one and only real God. His name was Abraham.

Here’s Abraham’s family photo! Abra­ham and Sarah have no children of their own. This family believes in lots of gods, and they live in a place called Haran, which means ‘crossroads’.

Ask the children to choose an activity from below:

Speaking activity: Give them a card with God’s words on, and ask them to practise saying the words together. What might God’s voice sound like? Can they recreate the sound?

“Leave your home and family, and go to a land I will show you. I will make you into a great nation! I will always be on your side. I will bless you, and through you I will bless everyone in the whole world!”

Drawing activity: Explain that God appeared and said: “I will give your children this land!” Invite the children to draw God, saying these words. What does God looks like? How did he appear?

Building activity: Children build a special altar to help them worship God, using whatever they can find around them (chairs, books, cushions, etc).

After around ten minutes, gather every­one together at the crossroads.

Our story started with Abraham’s family, who lived at the crossroads in Haran. One day, the one and only God spoke to Abraham!

Listen to God’s words from the speaking activity.

Abraham is at the crossroads, so he has to make a choice. Is he going to follow God or stay at home? Stay or go: what would you do?

Indicate ‘stay’ at the crossroads and ‘go’ in one direction, and ask children to vote with their feet.

Abraham chose to go with God. He and his family travelled to Canaan, where the one and only God appeared to Abraham!

Look at the pictures from the drawing activity (and say the words: “I will give your children this land!”).

Abraham built an altar so he could worship God in Canaan.

Visit the altar from the building activity.

Then Abraham and his family kept on travelling. After lots of adventures, which made Abraham a rich man, he came back to Canaan and settled there. God spoke to him again!

This time, God promised that Abra­ham would have more children than there are specks of dust on earth, and that all the land he could see would belong to them! What did Abraham do? He built another altar, like this one, so he could worship God in Canaan.

Encourage some discussion by asking these questions:

Which bit of the story do you like imagining?

You will need: a jar of hun­dreds and thousands; small plates

Remind the children that God promised Abraham he would have more children than there are specks of dust on earth. Even if he could count all the specks, it would take him even longer to count all his relatives.

Ask the children to guess the number of hundreds and thousands in the jar. Give them each a small heap on a plate and invite the group to count them. As you all try to do so, wonder together about God’s big promises and how we can believe in them. If God said he would give the children as many blessings as there are hundreds and thousands, would they try to count them? Or just eat them? Chat about what this promise would make you think about God.

You will need: the crossroads from ‘Bible story’

Explain that Abraham chose to believe God’s promise. He chose to go where God sent him. Everyone has choices to make, some big and some little, and they’re not always easy.

Invite children to stand at the cross­roads in turn and pray (silently or out loud) for help with a choice they have to make.