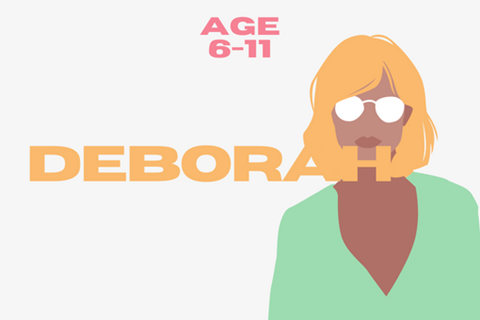 MEETING AIM: To explore what it means to be a bold peacemaker from the example of Deborah.

BACKGROUND: Deborah is one of the most unsung heroes of the Bible. She demonstrates total confidence in the promises of God and a quiet certainty in the decisions she made. Despite taking her people into a battle, her actions ultimately brought peace to her people. This session explores how we too can be courageous peacemakers, making wise decisions which help to bring peace.

As you begin the session, gather the children together in a circle and ask them who helps them to make good decisions. Who do they go to for advice? Who has helped them to settle their differences with a friend or family member, perhaps?

Invite the children to get into pairs and play a few rounds of rock, paper, scissors, or thumb wars. You could run this as a best of three, or a knock-out contest where the winning player of each pair goes through to play against another competitor until you are down to one winner. Talk about how we sometimes use these games to make a decision where two parties disagree, or to settle an argument. Do the group know any other ways?

You will need: dressing-up costumes (optional)

Invite the children to mime this story as you share it. You may like to define roles before you begin the story or just invite them to adlib.

Read directly from Judges 4, using a translation like NIRV or CEV, or use the retelling below. Pause as you need to through the story.

Deborah was a judge and a prophet who would hear from God and tell the people what he had to say. She would sit under a palm tree. People would come to her with their problems and arguments for her to settle.

One day, she called for a man called Barak and told him she had a message from God. God wanted Barak to take 10,000 men – warriors who would fight on God’s side – to fight their enemy, Sisera. God promised to give them victory.

Barak said to Deborah: “I will go, but only if you come with me!”

Deborah agreed but said: “Because of this, you will not receive the praise for winning this battle. Instead, God’s victory over Sisera will be at the hands of a

woman!” This was unusual; in those days, women didn’t fight in battles.

So Barak took his armies, and Deborah, to meet Sisera and his armies. Just as God promised, the battle went Israel’s way. Sisera could see he was in danger so he ran away, and as he ran he met a woman called Jael. She offered him a place in her tent. Sisera believed Jael’s family were on his side and that he would be safe here.

Jael gave Sisera a blanket to rest under and he asked for a drink of water as he was thirsty, but Jael gave him a drink of milk instead. Sisera told Jael to keep watch and not to let anyone know he was there, before he settled down for a sleep.

As soon as he was asleep, Jael took a tent peg and drove it into his head, killing him! When Barak came, she showed him their dead enemy! And so, just as Deborah had said, the Israelites defeated their enemy and victory was in the hands of a woman. There was then peace in the area for 40 years.

You will need: paper doilies; scissors; felt-tip pens; instructions for making a dove (can be found at youthandchildrens.work/links); map of world or local area, or recent newspapers

Work with the children to make some doily doves, following the instructions on the link above. As you make the doves, talk about the way a dove is often used as a symbol for peace. What other symbols can they think of? Why do you think these symbols are used?

When you have made a few doves, explain that we will be using them to help us to pray together. This can be done in a couple of different ways.

Firstly, you could use maps of the world or local area and spread these  in front of the group, or you could use newspapers and spread the pages out (make sure all the pages you use are appropriate). Invite the children to place a dove on an area on the map, or a story in the newspaper, where they want God to bring peace. You could invite them to write a prayer or prayer request on their dove, or simply place the dove as an act of prayer.

Gather the children together and pray over the various places where they have placed their doves. You may decide to talk about these things before you pray, or simply pray over them. Pray too for the children that they would be peacemakers, in these places, like Deborah.