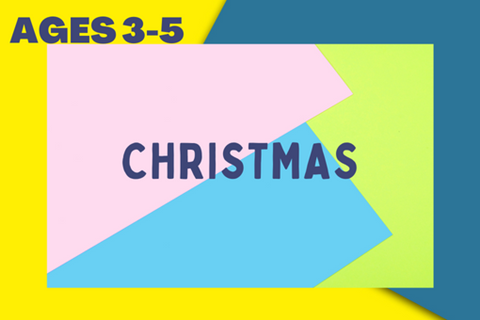 It may seem strange to have the Christmas story in September, but exploring this story out of season will allow the children to think about what is going on without the distraction of parties and presents, and without them being over-excited! Link this story of Jesus coming to earth with previous stories you have explored, particularly the prophets foretelling his coming (from session 1).

As you begin the session, invite the children to sit together in a circle and share a story from their week. Sometimes it’s helpful to have a sand timer so that you have time for each person to share if they want to. If a child doesn’t want to say anything, that’s fine. Pray and thank God for all the stories shared and the stories that weren’t mentioned.

You will need: anything that’s already in your room (tables, chairs etc); junk such as boxes and pieces of fabric; soft-toy animals

Ask the children to tell you what happens in the Christmas story. When they have identified the key points, get them to help you build some simple sets for the scenes in the story. A chair and table for Mary or Elizabeth’s homes, two chairs to mark the edges of the house in Bethlehem and a box as a manger, a green blanket and some toy sheep for the hillside. Let them use their imagination and whatever is to hand. Position the ‘sets’ in a horseshoe shape so the children not acting can just turn to see what happens next.

You will need: sets from ‘Setting the scene’; ‘nativity’ costumes, such as shawls, tea towels and tinsel

Tell the children that you’re going to act out the Christmas story and let them choose who they want to be. You will read the story and they will use the sets to mime and, if they are confident, improvise lines. Organise everyone with their parts and costumes; you will need Mary and Joseph, an angel, Elizabeth, more angels and some shepherds. As you read the story, you (or another leader) will have to help the children play their part and know where to go:

In a town called Nazareth, there lived a young woman called Mary. She was going to marry a man named Joseph. One day, an angel appeared to her and told her she was going to have a baby. This baby would be the son of God! She was very confused and worried, but she promised to do as God wanted.

She decided to visit her cousin Elizabeth, who was also going to have a special baby even though she was old. When Elizabeth saw Mary, the baby jumped in Elizabeth’s tummy. Elizabeth was filled with the Holy Spirit. She told Mary that she had been blessed by God! Mary felt much happier.

Joseph was worried that Mary was going to have a baby when they weren’t married. God sent an angel to Joseph in a dream. The angel told Joseph to tell him it was God’s plan. They should name the baby ‘Jesus’, because he was going to save God’s people. Joseph was relieved and he married Mary.

Mary and Joseph found out they needed to travel a long way to be counted by the government. Even though Mary was going to have a baby, they went to Bethlehem. When they got there, there was nowhere for them to stay. They had to stay where the animals lived. When the baby was born Mary had to lay him in a manger.

Up in the fields, shepherds were looking after their sheep. Suddenly a group of angels appeared! They were very frightened but the angels told them not to be afraid. They said a special baby had been born in Bethlehem. This baby would save the world! They would know it was him because he was lying in a manger. The shepherds hurried off to meet the baby.

When they got to Mary and Joseph, it was just like the angels had said. The shepherds told Mary everything the angel had said. She remembered it all carefully to think about later. The shepherds returned to their fields praising God.

If the children are enjoying it, and you have time, act out the story again, maybe swapping parts so that everyone can have a go at another character.

You will need: craft materials (whatever you can get hold of); scissors; glue; sticky tape

Help each child to make their own simple nativity set using the resources available to you. They could paint the characters on pebbles, draw them on cardboard tubes, model them from pipe cleaners, make figures from egg boxes, dolly pegs or even simple card shapes with a blob of plasticine to make them stand up. If your budget allows, you can buy make-your-own nativity sets.

Encourage the children to retell the story using their set, more active children might prefer to use the costumes etc to get up and act it out themselves again. Either way, use this time to ask the children who the story tells us Jesus really is.

Set the Christmas tree up in your space and give the children a bauble or decoration each. Ask the children to come up, one-by-one, to hang their decoration on the tree and thank God for a different part of the story. Once you have finished, look at the tree and sing your favourite Christmas song together (you don’t need music, just your voices!).