By Becca Dean is a writer and PhD researcher in Durham. She has written Be Live Pray, a book to help young people engage in prayer and spirituality in more inclusive and creative ways, and blogs at beccaislearning.com 2019-11-19T00:00:00+00:00 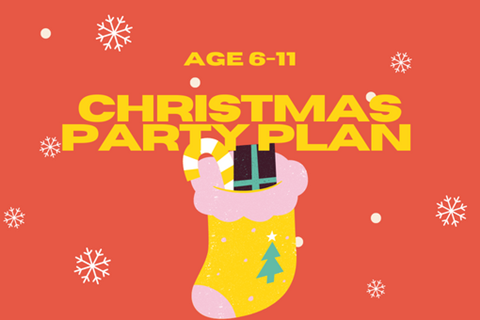 PARTY AIM: To explore the Christmas story and what it means, and to have fun doing so.

BACKGROUND: This party is designed for use in a variety of contexts – for example Sunday groups, after-school clubs and evening social clubs – so you’ll need to select the elements that are most appropriate for your setting.

Make sure you include the Bible story. It’s important to tell it, as you might have young people at the party who have never heard the real, biblical version before.

You will need: a laptop and projector; Wi-Fi access; Bibles

It’s likely that your group will know the Christmas story like the back of their hand, but how about using technology as a way of getting a fresh perspective? Show the group a couple of YouTube videos to help them explore the story.

Show Funny Nativity by Hannah  Sergeant. Years after the incident, the angel’s older sister (also in the video) uploaded a video of a not-so-angelic angel  in a children’s Nativity play at a church. The little angel’s mum had told her to sing up   so she could hear her, and the video reveals the angel bellowing out the song with all her might while the other children look on in awe and surprise! You can hear the vicar’s wife (who is doing the filming) giggling as her hand shakes!

Start a reminiscent conversation about the group’s childhood experiences of Nativity plays. It’s funny how nostalgic young people already are for their childhood in many cases! If you work for a church, you might have some shared memories of things not going to plan at Christmas. (I once set myself alight with a Christingle!)

Go on to check out The Christmas story by Stpaulsartandmedia. Here you’ll see sweet children with Kiwi accents narrating and acting out the Christmas  story.  Ask the group to create their own Nativity. They could pretend to be younger children or put their own spin on the story, using music, media and words that reflect who they are and what they like. Make sure you have Bibles on hand to help create an accurate retelling.

You will need: equipment for your chosen tasks (see below)

Taskmaster: a TV show in which comedians compete in bizarre tasks to see who will  win. Have a Christmas Taskmaster party.

You can be the Taskmaster and ask another leader to be your assistant! Depending on the size of the group, either ask them all to compete or ask them to do so in batches of three to five in a series of tasks on behalf of their group so that everyone gets a turn.

How about these Christmas tasks?

If you want to really get the creative  juices flowing and have some particularly comedic or wacky young people who will take this  chance to shine,  you could ask a young person to be the Taskmaster and

plan this activity with you beforehand and come up with some of your own tasks! Or go one step bigger and invite some adults from the church to join you all for some Taskmaster bonding over silly tasks!

You will need a points system. If there are five teams, award five points for first place, four for second and so on.

in each group to act  it  out. Groups have ten minutes to plan, and then they have to act the advert out to everybody. The one that most makes you want to shop at John Lewis wins.

Task idea 2: Give a contestant the full selection from a Christmas chocolate box (such as Celebrations or Quality Street). Ask the contestants to rank the chocolates from least favourite to favourite for the Taskmaster. Whoever is closest to the Taskmaster’s choice gets the most points.

Task idea 3: Invent a new Boxing Day tradition. Each contestant has two minutes to write it down before the Taskmaster ranks it in order of which is most ‘cosy’.

Task idea 4: Make a present for the Taskmaster out of tin foil. Give each contestant a roll of foil and see who makes the best present.

Task idea 6: Build a Christmas tree. Take  the group to an outside area, such as a park or a garden. They can compete as groups or individuals, depending on the size of the group. Ask them to build the best Christ- mas tree out of any raw materials they can find in ten minutes. (For example they could use something abstract to represent a tree, they could build a tree out of ‘branches’ or they could decorate an actual tree.)

It has to have three verses, a chorus and

a simple tune. Give the groups 20 minutes to write their carol and then sing it to everyone.

Task idea 8: Have a small stocking filled with five very random Christmas tree decorations. Contestants have to feel inside and describe what the decorations are. The most accurate description wins.

You will need: the relevant resources for whatever your group decides to organise One of the special Christmas rituals we have is sitting and eating with the people  we love. During a break from Christmas games, you could plan to share a meal with your older young people to demonstrate a coming-of-age and mutuality, giving them space to shape how you might celebrate together. Plan a Christmas meal with

your group. Give people different roles to help make it a lovely evening, for example setting the ambience (decorations / music), choosing a venue, planning and cooking the meal, organising some games or entertain- ment and planning a Secret Santa.

You might even want to think about inviting people from your wider community, such as church members, youth leaders or parents, to just spend time together or to say thank you for all that they do.