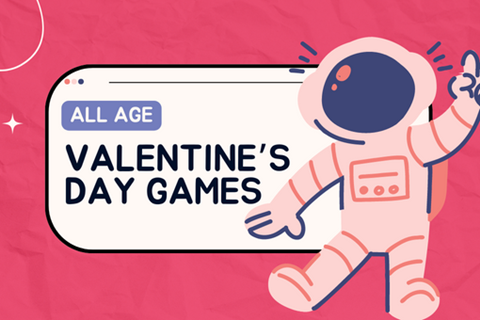 You will need: A4 card; felt-tip pens

Give out the sheets of card and felt-tip pens, then challenge the group to design and write a Valentine’s card from one member of a famous couple to the other. They should avoid using either of the people’s names. Couples could include Kanye West and Kim Kardashian, the Duke and Duchess of Cambridge or Sussex, Romeo and Juliet, Posh and Becks or Henry VIII and Anne Boleyn.

Once everyone has created their card, read them out to the group one by one and ask the young people to guess who the famous couple is. The person who guesses correctly keeps the card. At the end of the game, the one with the most cards is the winner.

You will need: bingo cards (see below); slips of paper; hat or bag; pens (or bingo ‘dobbers’)

Before the session, create bingo cards with the names of one half of various celebrity couples. Make sure all the cards are different so you end up with one winner. Write the other halves of the celebrity couples on slips of paper and put them in a hat or bag.

You will need: a collection of love ballads the children or young people will know and the means to play them

Before the session, gather together some famous love ballads your group will be familiar with. Split the group into two teams (or more if you have large numbers). Play the first line of the song and challenge the teams to carry on singing it. Award points for the correct next line and also for the title and artist. The groups could take it in turns to answer or you could make it a free for all! The team with the most points at the end of the game is the winner.

A variation of this game would be to give each team the lyrics to a song. Play the song and ask the children or young people to sing along (each team could sing together or nominate a member to sing solo). After a couple of lines, fade the music out. The team has to carry on singing for a few lines. Fade the music back in and award points for how closely the team is in time with the recording.

You will need: a table and two chairs

Stand the group in a circle with the table and chairs in the middle. Invite two volunteers to be the two people on the date. They should start acting out a date that is going badly wrong.

Tell the rest of the group that they should shout: “Freeze!” when they have an idea of where this drama about this bad date could go next, make sure everyone knows their suggestions should be appropriate for your group. They can then tap one of the actors on the shoulder and take their place in the scene. The drama then continues with the new participant.

Everyone should give the two actors a moment to develop the scene before shouting: “Freeze!” If the actors change too quickly, there will be barely any time for a story to develop. Keep the action going for as long as it remains interesting and not too bizarre!

If your young people are reluctant to act you could do this as a storytelling activity. Sit in a circle and take turns to come up with a sentence about a disastrous date.

Empty the packets of Love Hearts into bowls and place them at one end of your space. Mark off a line at the other end. Split the children or young people into teams and line each team up opposite one of the bowls of Love Hearts. Give the first person in each team a pair of chopsticks and make sure each team has an empty bowl.

At the end of a given time frame (or when all the bowls have been emptied), count how many Love Hearts each team has collected. The team with the most is the winner!

Finally, get the teams to vote on the best and worst slogans on their Love Hearts.