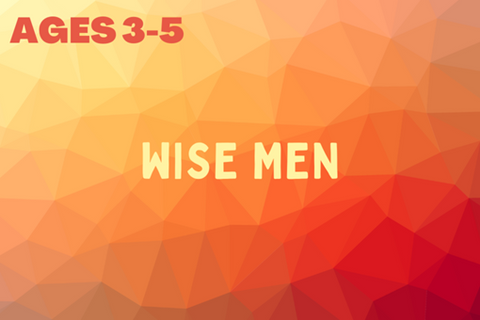 Background: There are some nasty aspects to the story of the wise men, which we will not be focusing on today, but there are several more surprises to conclude this series on the Christmas story.

Greet the children by name and share out any refreshments you have brought. Ask the children if anyone has had a birthday present recently, or an early Christmas present. How was it wrapped up? In paper, a cloth, a box, an envelope or a bottle? Comment that toddlers are often more interested in a present’s wrapping paper rather than the present itself! Is anyone any good at guessing what is inside a parcel? Sometimes we can, sometimes we can’t.

You will need: newspaper pass the parcel; music and the means to play it; two twigs or sticks

Before the session, create a pass the parcel using plenty of newspaper for each layer to bulk it out. Wrap the twigs or sticks in the middle (which can be bound together later in the session to make a cross). Play the game, then wonder together about what the two sticks might mean.

Gather the children together and tell this story:

In a faraway land there were some wise men who studied the stars. They noticed a star that rose in the east and was moving away from them toward the city of Jerusalem. They knew about the king of the Jews, whom everyone was expecting. Hold up the star. They decided they would have to follow the star to find out where it was going. Would the star lead them to this king?

At night-time they travelled, and in the daytime they rested. The star kept going. Move around holding the star, encouraging the children to follow you. On and on toward Jerusalem. At last they saw the city walls. The star stopped over the city.

“Hooray!” they thought. “We’re going to find this king.”

But King Herod, who was a bad king and lived in Jerusalem, didn’t like the idea of another king. He told these wise men to keep on following the star, which was still moving.

On and on they went. Move the star. Then the star stopped! It stopped in a small town called Bethlehem. It stopped over an ordinary house. They went inside. Here they saw a mother and a father, and a boy who was a toddler. This was Jesus. This was the king they had come to look for. This was no ordinary king. They were amazed to see him.

They gave him three gifts. Take the boxes and ask the children to open them, commenting on the ‘wrapping’. Inside one box was…a gold coin. Who wears a gold crown? Jesus was going to be a king, but not the sort of king who wears a gold crown. Inside another box was…frankincense, a sweet-smelling perfume. Spray some, being careful not to direct it specifically at any child. Sweet-smelling spice was burned to remind people that God hears prayer. People were going to pray to Jesus. Inside the third box was…a perfume called myrrh, which was used to rub on someone’s body after they had died. Inside this box are the two twigs. Jesus was going to die. He died on a cross. Bind the twigs together with the help of a child if possible.

The wise men set off home, but they did not go back through Jerusalem. They went another way because they didn’t want to see bad King Herod again.

Ask the children these questions, ensuring that everyone has the chance to contribute:

You will need: six-pointed stars cut from card, 10cm high with a slit from one of the points to the centre of the star; glitter thread or wool; sticky shapes; glitter glue; shiny paper; glue

Decorate two stars on both sides, slide one star’s slit into another star’s slit so they meet at the centre. Attach thread to the 3D star so it can hang on a Christmas tree. As you work, chat about what God is doing in the story. Have they discovered something new today?

You will need: stars from ‘Creative response’; song words and advent ring instructions from youthandchildrenswork/links

Light the fourth candle on the advent ring and remind the children about the stories behind the first three. You may want to light the fifth (Christmas Day) candle if you have not already done so. Sing all the verses of the song.

Everyone stands up and holds their tree decoration, swinging their moving star. Pray this prayer, encouraging the children to say: