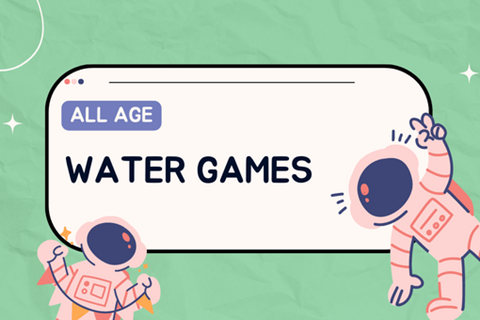 If you’re hosting summer parties or barbecues, what could be better than to play some water games? Just make sure the children or young people bring a change of clothes and a towel with them, as no parent or carer will appreciate a damp car seat when they come to pick their child up…

You’ll need some kind of water supply – hoses or large buckets filled with water – for these games, and you’ll want to play outside.

Seriously. Hell hath no fury like a church warden with a wet hassock!

THERE’S A HOLE IN MY BUCKET

You will need: two buckets per team; paper cups; chalk or masking tape Before the session, pierce some holes in the paper cups. The more holes, the more difficult the game will be. Mark two lines at either end of your playing space. Put buckets full of water behind one line and empty buckets behind the other.

Split the group into teams and line each of them up next to a full bucket. Give each team a paper cup and challenge them to move as much water from the full bucket to the empty one as possible using only the cup. The first player in each team fills their holey cup with water and runs to the other end of the space. Whatever water is left in the cup is poured into the empty bucket before the player returns to their team and passes the cup to the next player. The team with the most water in the bucket at the end of the game is the winner.

You will need: lengths of drainpipe; a drill; a way of sealing one end of the pipes

Before the session, drill holes along the length of each drainpipe (the same number in each pipe). Seal one end of the pipes using thick plastic bags and gaffer tape or drainpipe end caps.

Split the group into teams or all play together if you have a smaller group. Stand the drainpipe on the sealed end and challenge the players to plug every hole in the pipe with their fingers as you pour water into the top. They will inevitably miss some holes and struggle to keep the water in the pipe!

You will need: water guns; beach balls; chalk or masking tape Mark out two lines at either end of your playing space. Split your

group into two teams and line the teams up behind one of the lines. Give everyone a water gun and put an inflated beach ball in front of each team. The teams have to roll the beach ball to the other end    of the space by firing their water guns at it. They cannot use their hands or feet to move it, only water! The first team to cross the  finish line is the winner.

If you have a limited number of water guns or a limited space, play this game in a tournament style, with two teams competing against each other and the winner going through to the next round. If you have a small group, players can play individually.

You will need: water guns; targets; chalk or masking tape Set up a target (a large piece of cardboard with a target drawn on it would be suitable). Mark a line on the floor a suitable distance away from the target and challenge the children or young people to fire a water gun at it. The person who gets closest to the centre is the winner.

If you have a large number, spilt the group into teams and set up more targets. For a smaller group, each player could have their own target.

You will need: balloons; string; a stick; a  place  to hang the balloons (such as a tree, scaffold pole or the underside of a balcony)

Before the session, fill the balloons with water, tie the ends together and hang them up at different heights. Make sure they are all within reach of your players. Give the first player the stick and challenge them to burst a balloon by hitting it with the stick, making sure everyone else stands well out of reach!

You will need: sponges; water bombs; water guns A selection of water games wouldn’t be complete without a water fight. Provide as many water-fight projectiles and guns as you can and let the young people or children run riot. You could play this in teams (which would stop everyone ganging up on one person), but there really isn’t any way of determining a winner.

The leaders could have some super weapons they can bring out at various stages. Giant super-soakers would be good.

Alternatively, you could make a launcher out of bungee ropes. Have two leaders to hold one end of the launcher each and a third to put   a wet sponge or water bomb in the middle, pull the bungee ropes back and let go.