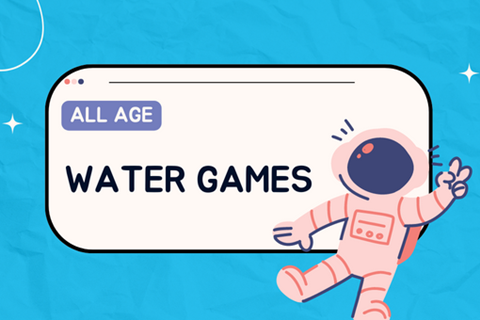 Set up an obstacle course using what is available (tables, chairs, sports equipment etc) and risk assess your course. Give each team a plastic cup and a full bucket of water. The players take it in turns to fill the cup with water and race through the obstacle course to an empty bucket at the end. The first team to fill their empty bucket up to a marked line wins the game. For an added challenge, pierce holes in the cups!

You will need: water balloons filled with water but not tied up

This is just like the over-under game with a ball or balloon, but with the aim of keeping as much water in their water balloon as possible! Split the group into two equal teams, lined up parallel to each other. Hand the open water balloon to the first person in each line. This game is a race to finish first, but also to keep as much water in their balloon as possible. With everyone facing the front, the first person has to pass the balloon back over their head to the person behind them. The second person then passes it under their legs to the person behind them. The balloon goes over and under the people until it reaches the back of the line. The person at the back must run around to the front of the line with the balloon and repeat the pattern of over-under until the first person is back at the front again. The aim is to be the team that finishes first and has the most water left in their balloon.

You will need: a shallow tray of water; a ping-pong ball; straws

This game is good for smaller groups or spaces and can be played inside as it’s not too messy!

Have a tray of water on a table with a ping-pong ball placed in the centre. Two players must stand either side and use a straw to blow the ball to the other side. The aim is to get the ball to the opposite edge of the tray and score a ‘goal’. The first to get three goals is the winner. Introduce additional ping-pong balls for an extra challenge!

Divide your group into teams and ask them to line up one behind the other. Put a bucket of water and a cup at one end and an empty bucket at the other. The front person must fill the cup of water and pass it down the line to the empty bucket at the end. They must use their teeth to pass the cup with their hands clasped behind their backs. The last person in the line pours the cup into the bucket and runs to the front to go again. Use a timer and the team that fills their bucket the most wins. This game can also be played by passing filled sponges with their hands instead of cups in the mouth.

You will need: large bucket of water; sponge

This is a twist on the classic game of duck-duck-goose, except instead of touching the heads of the players, water is dripped on them!

Put everyone in pairs and stand them in two lines opposite their partner with a metre gap between them. Give one from each pair a water balloon. They should throw their balloon to their partner. After every team has done this, everyone takes a step backward and throws the balloon again. If the balloon is dropped or broken, then that pair is out. Keep increasing the distance between the pairs until there is only one winning team left with a water balloon.

You will need: a small cup of water; a pen and paper; access to more water

Arrange everyone in a circle, choose one person to be ‘it’ and give that person a cup of water and the pen and paper. They should stand in the middle and choose a category (eg ice cream flavours, colours, books of the Bible, pizza toppings), then write down something from this category. The player in the middle asks each person in turn to name something from that category until someone says the thing written on the paper. They then get the cup of water thrown at them and it’s their turn to be in the middle. Water can also be thrown if they hesitate or repeat an item!

By the youth and children’s teams at Holy Trinity Brompton.