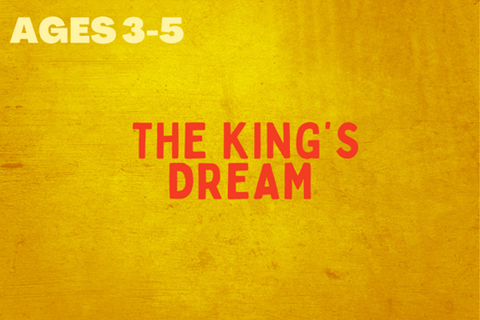 Background: The stories in Daniel initially seem like easy ones to explore with younger children, yet many are filled with uncertainty, threat and actual violence. However, there is still much for children to discover about who God is and about their relationship with him. God stands with his people during these times of peril and he stands with us now. We can rely on and look to him for help and protection.

Welcome the children by name and invite them to join you in your circle. Share out any refreshments you have and chat with the children about the events of their week. If you have done anything out of the ordinary, share it with the group (if appropriate). Ask the children if they have had any funny dreams this week. You may need to acknowledge that sometimes we have bad dreams but that they are just that: dreams and not real. Comment that the children can talk to their parents, carers, you or other adults they trust if they feel unhappy or scared.

You will need: junk (such as egg boxes, silver foil, cardboard and scraps of material); sticky tape; scissors; felt-tip pens or paint and brushes (plus cover-up and clean-up equipment)

Work together to create a statue from all the ‘junk’ you have collected. Colour or paint the statue however the children would like. Alternatively, provide lots of Duplo bricks (or similar) and create statues using your chosen building blocks.

As you work, talk about statues the children have seen around your neighbourhood or town. When you have finished, display the statue for everyone to admire. You may even have statues in your church building. If so, go and see them and chat about who they depict and what they might mean.

You will need: picture of the statue described in Daniel 2:31-33 (or a Duplo or junk-model version of it); cover for your picture or model; cushions and pillows; play people

Before the session, draw a picture or make a model of the statue from King Nebuchadnezzar’s dream (described in Daniel 2:31-33). Cover the drawing (or model) so the children can’t see it.

Gather the group together and invite them to lie down on the cushions and pillows. Explain that you’re going to tell them a story that starts with a dream. Encourage them to pretend to sleep before ‘waking them up’. Stretch and rub your eyes, then go on to tell this story:

Once, a long time ago, there were four friends. They were called Daniel, Shadrach, Meshach and Abednego. Set out four play people. They were friends of God, but they had been taken away to live in a foreign land. The king in this new land was called Nebuchadnezzar. All practise saying the name Nebuchadnezzar. Produce another play person to be the king.

The advisers and helpers were upset. Show the covered picture or model. If they didn’t know what the dream was, how could they tell him what it was about? The king became very angry.

But Daniel knew someone who could help. He and his friends asked God to show them what the dream was about and what it meant. And God did. Uncover the picture or model to reveal what it is. The king had dreamt about a giant statue made of different materials like gold and iron. Point to the different parts of the statue.

Daniel went to the see the king. “Oh, Nebuchadnezzar,” he said, “God has shown me what your dream means. Your kingdom is like the gold part of the statue. Point to the top of the statue. It is shining and beautiful. But there will be kings who come after you who won’t be as strong. But after that God will set up a kingdom that will never end!”

God looked after Daniel and his friends, even though the king was angry and threatened them. They were safe, and Nebuchadnezzar even gave them better jobs!

Chat about the Bible story using these questions. Try to involve all the children in the discussion:

Show the children the paint and paper, and challenge them to use the four colours to create a picture. As you work, continue your chat about the story. Share a story from your life about a time when you were scared and relied on God to help you.

Once you have all finished, admire the pictures together. If any of the children want to tell the group about their picture, let them do so.

You will need: play people (enough for one each)

Give each child a play person and ask them to hold that person in their hand. Say that God holds us safe in his hands, just like the children holding the play people. He keeps us safe! Ask the children to think about anything in their life or in the upcoming week that they feel scared or worried about.