Ready to use games – Bonfire games 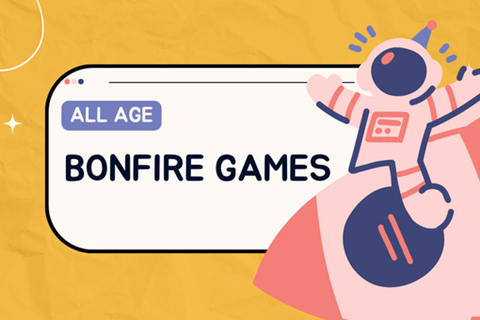 If you’re having a Bonfire Night party, here are some games to go alongside your fireworks and hotdogs. In fact, these games

would be suitable for whenever you have a campfire as they are all designed to be played outside. You might need to risk-assess them, but then you’ll need to risk-assess your whole Bonfire Party, so another line on the assessment isn’t going to create much hassle.

into the cannister in turn and snap the lid on very quickly. Turn the cannister upside-down (so that the lid is on the floor) and retreat to a safe distance. After around ten seconds the cannister will fly into the air. (If the rocket doesn’t pop, wait about 30 seconds before going back to it.) Once everyone has taken a turn, decide whose rocket went the highest.

You will need: squeezy bottles (such as washing-up-liquid bottles); watered-down poster paint; a target drawn on a large sheet of paper; chalk

Stick the target to a wall and mark out a line that is a few metres away from the target. Give each person (or small team of people if you have a large group) a squeezy bottle filled with a different coloured poster paint. Standing behind the line, they should take turns to ‘fire’ their paint at the target.

Award points for the person who gets closest to the centre of the target, but also for the most attractive ‘starburst’ and the most flamboyant firing style!

You will need: a light-up frisbee (available online); torches or smartphones (optional); chalk or cones

Mark out a court in your outside space using the chalk or cones. Create a large central section with a ‘touch-down’ zone at either end.

Divide your players into two teams and position them in the large central part of the court. Assign a touch-down zone to each team. The players have to pass the light-up frisbee between them and try to get it into their touch-down zone. One of their players  has to catch it in the zone to score a point. If they drop the frisbee it doesn’t count! Set a time limit; the team with most points at the end of the game is the winner.

If you don’t have quite enough light to play outside, give each player a torch or encourage them to use the one on their phones.

You will need: a large baking potato (or tennis ball); a stopwatch, smartphone or kitchen timer

Stand everyone in a circle and give one person the potato (or ball). Set a random time on the stopwatch or phone (anything between ten and 30 seconds) and press start. The players should pass the potato around the circle by throwing it to the person next to them. The person left holding the potato when the timer goes off is out and should sit down. Keep playing until you have a winner.

Sit the group around the campfire and challenge them to tell a story. You could tell it with each player saying a word or sentence in turn. The story will probably lose any sense quite quickly, but that’s all part of the fun. For an extra challenge, give each player a word they have to insert into the story, such as trombone, flamingo, porridge or jitterbug.

Alternatively, give out pens and slips of paper and ask the players to write down the name of a person, a place and an object on separate pieces of paper. Collect them in and ask everyone

to choose one of each. The aim is to create a story that features these three suggestions.

You will need: hotdog sausages; hotdog rolls; ketchup; mustard; fried onions; alternatives for those with different dietary require- ments; a stopwatch or smartphone

Work with your group to create a champion hotdog using the various elements you have available. Make three or four, then invite some volunteers to come forward and attempt to be the quickest at eating the champion hotdog. Line your volunteers up at the front and get the others to cheer for all the competitors. On the signal to begin, start the timer. The volunteers have to eat the hotdog as quickly as they can.

If you have more volunteers, make up more hotdogs and hold another contest. Declare the person with the quickest time the winner.

Divide your group into smaller teams. Challenge each team to create a mime or dance that represents a firework going off using their bodies. They can create their own sound effects to add to their performances. Once everyone is ready, get each team to perform their ‘fireworks’ and ask a couple of leaders to decide which is the best.