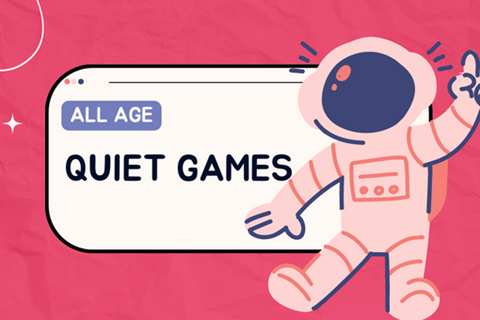 You might be blessed with lots of sound insulation in your childrens or youth venues, or you might meet away from other groups. On the other hand you might meet in a room right next to the adult service, with thin walls and a vicar who disapproves of the service being disturbed. Here are some games you can play when you need to keep the noise down.

You will need: pack of playing cards

This game is similar to Spoons or Slam, but is quieter and less violent! Before playing, sort the cards out into sets of four of a kind. You’ll need one set per player. Shuffle the cards and deal out four cards per player. The players should choose one of their cards to pass to the player on their left, then pick up the card being passed to them on their right. The aim of the game is to collect four cards of the same number (or rank, for picture cards). Once a player has collected four of a kind, they should make a silent signal, such as sticking out their tongue or putting their thumb on their forehead. Other players who notice someone making this signal should do the same. The last player to make the signal loses.

The losing player can be out, with people dropping out after successive rounds until you have a winner. Losing players can be out just for one round, or you could keep a tally of each player’s losses.

Give each player a pen and paper. Everyone should write down a problem or dilemma a person might have: “I sneezed on the train and got snot over the back of the person in front of me.” “I ate all my sister’s Christmas chocolate and she blamed our dad.” “I got my toe stuck in an escalator and now it’s turned black.”

They should fold the top of the paper over, so that the problem can’t be seen, and pass the paper to the person on their left. This person should write a solution to the problem, without knowing what the problem is. Once everyone has finished, unfold them and read them out. Give points for the funniest or most appropriate advice.

WARNING: You may end up laughing a lot, and so make too much noise, even though the game itself is quiet…

You will need: pre-made anagrams –printed out, on PowerPoint or written out on a large sheet of paper; pens; paper

Before the session, create some anagrams. These can be of words that link into your session, celebrity names or the names of people in your group. (If you find this difficult, there are several anagram generators online.) Print them out, put them on a PowerPoint slide or write them out on a large sheet of paper. Challenge the group to solve the puzzles and reveal the right items or names. The one with the most right (or who finishes the quickest) is the winner.

Before the session, collect together baby photos of your group members and leaders. Number them and stick them up around the room. Give each player a piece of paper and a pen and challenge them to guess who all the baby pictures are.

If it would be difficult to get photos of people in your group, search for ‘baby photos of celebrities’ on the internet and use those instead. To make it easier, you could give the players a list of the celebrities featured.

The player who guesses the most correctly is the winner.

You will need: a range of objects; a tray; a tea towel; stopwatch or smartphone; paper and pens

Not the most exciting of games, but it is quiet and you can add in some variations. For the basic game, puta variety of small items (such as a stapler, toy car or grape) onto a tray and show it to the players. Give them 30seconds to memorise the objects and then cover the tray with the tea towel. Give the players paper and pens and challenge them to make a list of all the objects they can remember. The winner is the player who can name the most objects. An alternative to this version is to remove one of the objects after the initial 30-second memory time. The players have to guess which object is missing.

Different variations on this include using jars with strong-scented items or liquids, such as vinegar, lavender or soap. Players smell the jars and then have to write down all the smells they can remember. You could use touch by placing objects in bags that the players have to feel, then remember.