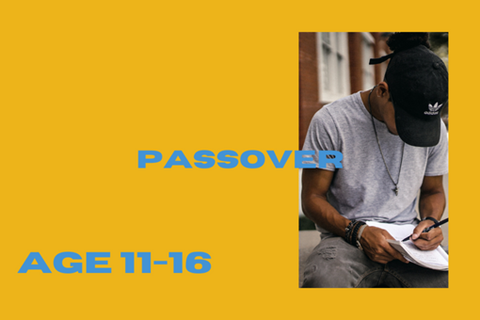 Share out your refreshments and ask the group about phobias: is anyone scared of anything? Explain that this week we’re looking at Moses and the Passover. Before the final plague, there were nine plagues: water turned into blood; frogs; biting insects; livestock disease; boils; hail; locusts; darkness. What would be the worst plague you could think of?! (You could serve something like gummy worms or Freddo frogs to go with this discussion!)

You will need: lots of space; newspaper (enough for two sheets per group); chalk or masking tape

Split the group into teams (if you have a small group, stay together and make it a timed activity). Mark two lines on the floor, a good distance apart. Ask for a volunteer from each team (you might want to warn them that it requires a lot of physical work!) and stand them behind one line. Ask the teams to line up behind the other line, opposite their volunteer. Explain that the gap between them is a sea! Give each volunteer two sheets of newspaper. Explain that the volunteer should free his group by going and getting them to bring across the sea. The paper is the only dry land, so the only thing they can stand on. Any number of group members can cross at once, but no one can step on anything other than the ‘dry land’. The winning group is the one to get all their members back first! If it’s just one big team, you could give them two minutes to get back.

You will need: The Prince of Egypt film and the means to play it; Bibles

Remind the group of what has happened so far in the great story of the Bible. (If you have been using the visual timeline, go through the pictures to remind the group.)

Show the clip from The Prince of Egypt that shows plagues two to nine (1:02:30 to 1:05:20 - chapter 21 of the DVD). Ask the group to think about what it must have been like for the Egyptians. Which plague does the film show that isn’t in the Bible? (Fiery hail!) Why did Pharaoh act the way he did?

Give out the Bibles and ask the group to turn to Exodus 12:21-28. Read the passage together and ask the young people to think about why God told the Israelites to celebrate Passover every year. What is it about this event which is special?

You might want to organize a time to watch the whole of The Prince of Egypt together. At the moment, it is available on Netflix. Otherwise someone in your congregation will almost certainly have the DVD.

In the discussion it would be helpful to draw out the significance of the Passover for the Jewish people. Use these questions as a guide to discussion, though try to be attentive to the questions the group may have, or significant points that the conversation takes.

Explain that Jewish people still celebrate and remember the Passover. You can find more information about the Jewish Passover meal or Sedah online if you want to explain it in more detail (try bbc.co.uk/ religion/religions/judaism/holydays/ passover_1.shtml).

Two parts of the Passover meal are the unleavened bread and wine. The wine symbolises the sacrificed lamb’s blood that was painted on the doors, so that the Lord would pass over their home.

Set out a plate with some matzos or pitta bread. Pour red grape juice into four cups. Explain that as part of the Passover meal, Jewish people drink from four cups of wine, each symbolising a promise of redemption that God made to his people about their Exodus from Egypt: “I will take you out…” “I will save you…” “I will redeem you…” and “I will take you as a nation…”

Invite the group to share in the bread and juice to celebrate and remember the first Passover.

One big element of the Exodus is that God is interested in setting people free. Ask the group for suggestions of the kinds of slavery people are in today. Together write a list of these people and invite the group to pray for them. You could pray for someone on the list and then pass the paper to the next person.