Parable: Betty and the bench of embarrassment 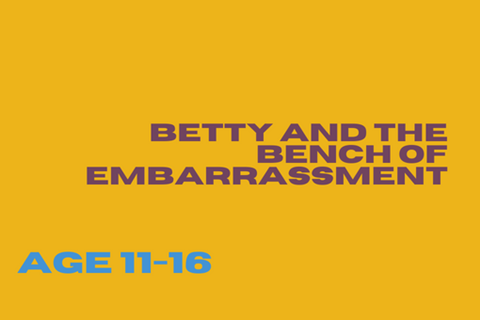 It had been the talk of the school for weeks: Prince Harry was coming to open the new science block. Ever since the head, Miss Whittaker, had announced it the children’s conversations had revolved around nothing else. He was going to give a talk to the whole school, open the science block and then have lunch in the canteen.

Betty was determined to be ready. She had insisted that her stepmum wash and iron all her uniform, and the night before she had selected the best shirt, jumper and skirt from the pile. She was going to stand out. She was going to be noticed.

She arrived at school on the big day and met her friend Melissa. “I’m going to have the same thing as he does at lunchtime so he knows how much I like him!”

“He’s married, Betty,” said Melissa. “What do you think’s going to happen? Do you think your eyes are going to meet over a lemon sponge?”

Melissa watched as Betty hurried off. She had a horrible feeling that the day wasn’t going to end well.

All the tutor groups were standing in line, waiting to go into the hall, when they arrived.

“Right everyone,” said Mr Walsh. “Come in and sit down.”

The lines shuffled forward. Betty was desperate to get inside. Finally, her tutor group walked through the door and filed into a row of chairs halfway back. This wasn’t part of Betty’s plan; she wasn’t going to get spotted back there. Then she noticed that the front row was empty. She rushed forward and took pride of place.

The whole school stood as the royal party entered the hall, and there he was: the Prince! The group walked to the front of the hall, led by Miss Whittaker.

“Betty!” hissed Miss Whittaker. “What are you doing here? This row is reserved for our special guests. Get back to your group!”

Betty stood up and noticed with horror that there weren’t any spare seats apart from a bench at the back of the hall. The entire school watched as she walked down the aisle, her cheeks as red as the hair of the prince she was trying to impress.

This story is based on Luke 14:7-11. Read this passage to the group and compare Jesus’ story with this one. Discuss what Jesus might have been saying through his parable, encouraging the group to think about it in a new way.