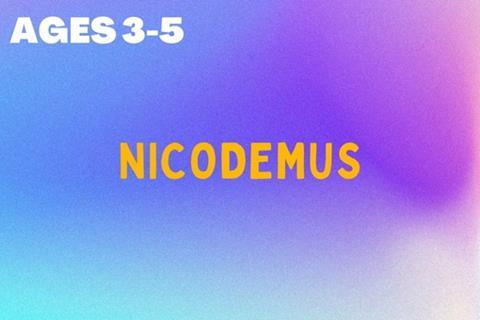 MEETING AIM: To think about how God sent Jesus because he loves each and every one of us and wants us to be with him in heaven.

BACKGROUND: Nicodemus was a Pharisee, a respected religious leader. He came to Jesus at night because he didn’t want the other Pharisees to witness his curiosity. He leaves this conversation still pretty confused but when he appears again later in John’s Gospel we see that he has been changed by his encounter with Jesus (John 7:50-51 and John 19:39).

If you have fostered or adopted children in your group you might want to think  about rewording or adding to the section where Nicodemus asks about  babies being born from their mother’s tummies.

Invite the children to sit together in a circle. Encourage them to share stories from their week. Celebrate any birthdays, or special events. It can be helpful to have an object  or cuddly toy which you pass around for the child talking to hold as they speak. Explain that you’re going to hear a story about someone who went to speak to Jesus. Ask the children: “If you could ask Jesus any question, what would you ask him?”

You will need: paper; collage materials; glue; pens and pencils

You will need: a doll; a globe or picture of the world

Gather the children together and explain that the story is about a man called Nicodemus. He wanted to speak to Jesus. Nicodemus was a man who studied God’s laws and tried really hard to obey them.

Ask the children if they think it’s easy to follow the rules all the time. Nicodemus was a Pharisee, which meant he was a religious leader who helped try to teach other people about God too. The Pharisees didn’t like Jesus though because they felt like he didn’t listen to the rules they wanted everyone to listen to. Tell this story:

Nicodemus wanted to ask Jesus a question, but he didn’t want the other Pharisees to see him. In those days it was really dark at night-time. They didn’t have streetlamps like we do now. So, one night Nicodemus went to speak to Jesus.

Let’s pretend to be like Nicodemus. Dim the lights and invite the children to join you in knocking on the door and pretending to sneak inside the room.

He found Jesus and he said: “We all know that God has sent you to teach us. You wouldn’t be able to do all the miracles we’ve seen if God wasn’t with you.”

Jesus replied: “No one can see the kingdom of God unless they are born again.”

Nicodemus was confused. Ask the children if they can make a confused face.

He asked: “But how  can someone be born again, especially when they are

already old? Surely when we’re grown-up we’re far too big to get back into our mother’s tummies to be born again?!”

Can you imagine? We’re all much bigger than babies now! Hold up the doll. I definitely don’t think we’d fit!

Jesus answered Nicodemus and explained how babies are born after they grow inside a mummy’s tummy and also we can be ‘born again’ and join God’s family too.

God sent Jesus to the world. Hold up your globe or picture of the world. Because he loves everyone, and anyone who believes in God gets to live with God for ever and be part of his family. Nicodemus couldn’t do anything to make God love him more.

Nicodemus was still confused. Ask the children to make their confused faces again. It sounded different to what he’d known before.

Jesus was saying that God loved the whole world. Everyone. Good people and bad people, rich people and poor people, young people and old people! Those who love him and those who hate him. None of us have to do anything to make him love us. He already does. And he loves us still even when we mess up. He invites us all to be part of his big family. All we have to do is choose to believe in him, to love him back.

Nicodemus probably left Jesus feeling pretty confused. We don’t know what he said at the end of the conversation but later in  the Bible we see him standing up for Jesus (John 7:50-51), and then he’s there helping when Jesus dies (John 19:39). I think he let God start changing his heart, making his life look totally different and new.

Ask the children these questions, encouraging everyone to take turns in contributing:

You will need: paper outlines of people; pens; pencils; glue; collage materials Give each child an outline of a person and invite them to decorate a picture of themselves.

When they’ve finished, stick their pictures all onto one big collage, you could use your world picture from earlier.  (Let the children do two pictures if they’d also like to take one home.) Say: “God loves everyone. He loves all of us. He loves [name each child individually and point to their picture as you do].”

You will need: collage from ‘Creative response’

Look at your collage together and say this prayer:

“Thank you God that you love us all. Thank you that we don’t need to do anything to make you love us but that when we believe in you and choose to invite you into our lives we get to be part of your family and live with you one day in heaven for ever.”