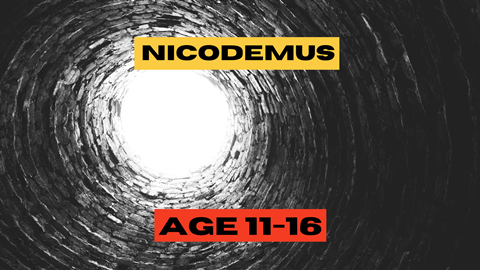 MEETING AIM: To explore what it means to be born again.

BACKGROUND: Nicodemus is one of  the  religious leaders. Most of his colleagues are against Jesus and what he is trying to do, but Nicodemus is different. His encounter with Jesus changes him (see John 7:32- 52 and John 19:38-42) and also results in one of the most famous verses in the Bible. Before the session, reflect on what being born again means. Why does Jesus speak to Nicodemus in the way he does?

How far you dig into this passage will depend on the make-up of your group. Young people who have grown up in church might be further down the road of understanding this encounter than those who are hearing this story for the first time. However, be ready for some amazing revelation from all young people as they listen to God!

Welcome the young people and share out any refreshments you have brought. Chat together about what has happened this week. Rejoice in the young people’s triumphs and sympathise with their difficulties. Use this time to build relationships and settle into the session. Ask the group if they have ever met anyone who has changed their life.

Ask the group to think of something silly they have done wrong over the past week. Perhaps someone managed to drop their phone down the toilet or missed the bus to school because they spent too long on their hair. Put that person ‘on trial’, with others defending and prosecuting them. Ask someone to be the judge, others witnesses and the jury. Encourage the group to come up with light-hearted reasons to exonerate or condemn (don’t let it get personal!). Is it fair to judge people?

You will need: large sheets of paper; marker pens

Give the young people the passage to read. Get them in small groups to act out, in 15 seconds, the opening scene where Nicodemus comes to Jesus. Ask them to think through the different emotions Nicodemus could be feeling. Judging from the passage, which emotions are most likely? Get them to think how he comes to Jesus. Is he sneaking up to him like a ninja, or striding in the front door? Let them present their mini-sketches to each other. Ask why they thought Nicodemus acted in that way and encourage the group to debate which way best represents the Bible passage.

Go on to ask the young people if they think the world is a good place or a bad place. Set out two large sheets of paper and invite the group to write or draw all the things that make the world good on one sheet and bad on the other.

Give Bibles out to the young people, and get them to read John 3:1-21 as a group. Tell them you’re going to look at the second half of the passage first. Ask the young people what this passage tells them about the world. What does it tell them about whether the world is a good place or a bad place?

What does God think about it? Add any new ideas onto the relevant sheet of paper, perhaps in a new colour or pen.

Explain that there are two things to see in this part of the passage. The first is that God loves the world; the second is that the world is perishing and unless God does something it’s going to be condemned. Jesus doesn’t come to condemn it (as he has every right to) but rather to save it. Ask the young people: what’s God’s plan to solve this problem? How does he work out his love for a broken world?

God’s love for the world looks like Jesus coming to die to bring people eternal life, to rescue people out of their darkness and bring them into the light, and to save people from condemnation.

You will need: art and craft materials; paper; reflective music and the means to play it (optional)

Be available to chat during this time; the young people should also be able to chat between themselves. Although this activity is marked as being ten minutes long, you can spend as long as you like doing this – it can be a powerful time of engaging with God.

Spend some time thinking about  what Jesus accomplished on the cross. Give the young people some space to write down a couple of things that Jesus did for them on the cross and to pray about these things. You could do this out loud or give the group some space to engage privately. If you’re  the kind of group that sings this would be a good opportunity to sing a song of praise to God for what he’s done on the cross.