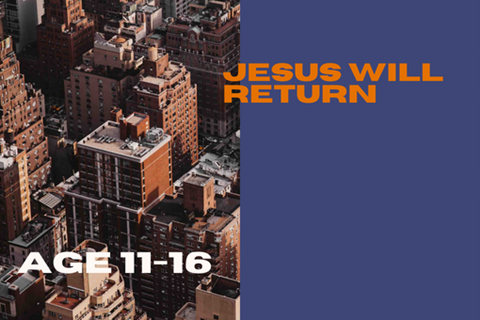 Background: This session is looking at 1 Thessalonians 4:13-5:11 to explore the idea of Jesus’ return. It was a particularly confusing idea to the early disciples, especially given that Jesus’ walk on Earth was such recent history. Despite this being 2,000 years later, it is still confusing and different people have interpreted this idea in different ways. The early disciples were expecting Jesus at any moment and still open to the idea of immediate revolution, whereas we may have grown like those who sleep in the passage, and have stopped being alert to the possibility of Jesus’ return happening at any time.

As the group is gathering, ask some introductory questions to introduce the theme of waiting. What’s the longest you’ve had to wait for something you really wanted? How was the wait? Do you agree with the old saying that a watched pot never boils?

Get the group to lie down on the floor. They should close their eyes and remain still and silent. You then go around and look out for any signs of movement. When you catch someone moving, they join you and walk around looking for other people’s signs of movement. You’re allowed to say things to try and make people laugh (in fact that’s the fun of it!).

Explain that in the passage that you’re looking at today, there are many metaphors. One is of people being asleep who aren’t really asleep!

You will need: Bibles; paper and pens

This passage has a lot of metaphors to explain Jesus’ return. Though in some ways it’s confusing, it’s also a clever way of Paul (who wrote Thessalonians) trying to make something complex and strange easier to grasp for the early disciples who were still trying to work out when and how Jesus would return.

Make sure everyone has a copy of the passage. Read through it together, but ask the group to look out for metaphors as you read it out. You may need to explain to them that a metaphor is when an image of something else is used to describe something that it isn’t literally the same as. Ask them to keep a list of the metaphors, and then at the end go through them together.

The metaphors throughout these passages are: going to sleep (rather than death), the thief in the night, a pregnant woman going into labour, light and dark, day and night, being awake or asleep (ready and waiting or not), breastplates and helmets.

With the group, discuss the metaphors and why you think Paul is using them to explain Jesus returning. Do they make it easier or harder to understand? Why? What modern-day metaphors might you use instead?

Having unpacked the metaphors in the passage, and got deeper into the meaning of them, extend your discussion and understanding of the passage with these questions:

You will need: modelling clay (Fimo is particularly good - you may need to take the creations away to bake or set, so bear this in mind when you’re choosing clay)

There is a strong challenge in this passage about being alert and ready for Jesus to return, and expectant. As you’ll have explored with the group, Paul uses various metaphors to convey the importance of waiting for Jesus to return. For us it is a

challenge to remain focused, that God’s work will continue and that we are part of that. It is also a hope-filled reminder that God is not yet done in his redemption plan.

You may have discussed other metaphors that might work. One example of staying alert is a reminder on your phone - we might set reminders so that we don’t forget important things at the right time!

This activity is about making something that acts as a reminder that Jesus is going to return. Ask the group members to think of something that represents the challenge or the good news that Jesus is going to return, and use the modelling clay to make a small reminder of his promise to us to put somewhere that they’ll see regularly to remind them.

In Thessalonians 5:11 Paul encourages the Church to support each other: “Therefore encourage one another and build each other up, just as in fact you are doing.” He sees this as a key part of being in this time of waiting for Jesus to return.

For the prayer time, encourage and build each other up by praying for them. Depending on time and the size of the group, you could pray for each person as a whole group, asking each member if they want to share particular areas of need that they might have for prayer. Depending on your tradition, you could even physically demonstrate this by asking everyone to place their hands on the person being prayed for, as the early Church did for each other. Though only do this if it feels appropriate to the group and won’t make group members uncomfortable, and of course, encourage the laying on of hands in appropriate areas only.

Alternatively, if the group is too large to do this together, split into pairs and ask each member of the pair to share areas of prayer need, and for them to take it in turns to pray for each other.

As the group finishes, encourage the group to continue praying for each other and encouraging each other beyond this session.