Jesus starts it all 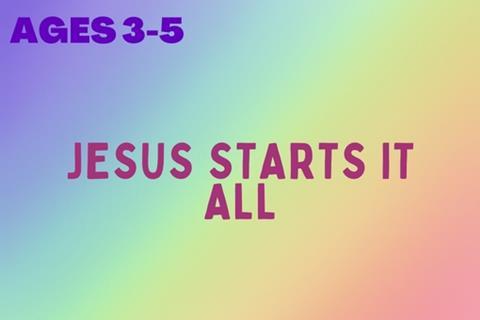 Background: There is a lot to cover in this passage. It begins with John the Baptist telling everybody to get ready for Jesus and baptising those who want to follow God. Then John baptises Jesus before he goes into the desert for 40 days, where he shows the devil how powerful he is. After this, Jesus went on to choose his disciples and began to tell people about God’s word. The focus in this session is God’s rescue plan – Jesus – and how powerful he is. It explores how he came to rescue every single one of us.

Invite the children to sit together in a circle. Encourage them to share stories from their week. Celebrate any birthdays or special events. It may be helpful to have an object or cuddly toy to pass around for the child who is talking to hold when they speak. Ask the children: “What do you think of when you imagine someone being rescued?” Thank God that he’s with you and ask him to help you learn more about him today.

You will need: a large piece of paper; blue tissue paper; glue

Draw a river and riverbank on the paper before the session. Lay it out on the floor and encourage the children to use glue to stick on the tissue paper. Talk about how many people in the Bible, including Jesus, were baptised in rivers. Explain that people get baptised as a way of showing that they are sorry for the wrong things they have done and that they have chosen to follow God.

You will need: toys to represent characters in the story (action heroes, dolls or cuddly toys will do); the river picture from ‘Intro activity’; some scratchy fabric; a picture of a dove or a toy bird

Sit around your river picture. Choose a toy to represent John and tell this story:

John was born at around the same time as Jesus. When John grew up he started telling everyone to get ready for God’s big rescue plan, to get ready for Jesus. He told them all about how powerful Jesus was.

People probably would have thought that John was a little unusual. He lived in the desert and wore clothes made of camel hair. Wrap fabric around the toy.

That must have been so itchy! And he ate locusts and wild honey. Anyone fancy a grasshopper as a snack? Not me! But God had given John the special job of telling everyone about him. Use a selection of toys to act out John baptising people as you tell the next part of the story.

John baptised people. This meant that when they said they were sorry for the things they had done wrong and wanted to follow God he would dip them under the water and then lift them back out again.

Jesus came to the Jordan River, where John was baptising people. He was baptised by John, even though he hadn’t done anything wrong. ‘Baptise’ the toy that represents Jesus.

As Jesus was coming up out of the water it was like the sky opened up! The Holy Spirit came down in the shape of a white dove and rested on Jesus. A voice from heaven said: “This is my son. I love him. I am very pleased with him.” Who do you think said that? Hover your toy bird / dove over the toy.

After Jesus was baptised he went out into the desert for 40 days. He needed to get ready. He thought about all the things he and his Father would do together. His enemy, Satan, who had tempted Adam and Eve in the desert, was there. Satan didn’t want Jesus to tell everyone about God. He tried to get him to stop doing what God wanted him to do. But Jesus didn’t listen. He refused to believe anything Satan said. He was going to save all the people and get rid of their sin, and nothing was going to stop him! Have your Jesus toy come back to the crowd of other toys.

After this, Jesus went into a town in a place called Galilee to tell people about God. He was going to win God’s people back. God’s powerful rescue plan had begun.

Ask the children these questions, encouraging everyone to take turns to contribute (use your object or cuddly toy if you passed one around earlier): • What was your favourite part of the story?

You will need: a washing-up bowl; hand soap; toys that can be washed; towels

Lay out bowls of bubbly water and invite the children to wash their hands and the toys. You could also use the story characters and let the children ‘baptise’ them.

As the children wash their hands and toys, talk about how Jesus came to tell people how much God loves them. Lots of people choose to follow him, say sorry for the things they have done wrong and get baptised. When you’re baptised, it’s like you’re being washed clean on the inside and outside.

Thank Jesus that he came to rescue us. Thank him that he loves us and that when we say sorry for the things we’ve done wrong he forgives us.

You will need: the river picture from ‘Intro activity’

Have the children take their shoes off and stand next to the river picture. Thank Jesus that he came for everyone and use the river to pray for each child. Say: “God, thank you for sending Jesus to rescue [child’s name].” Encourage each child to jump into the river as their name is called. Finish by praying: “Thank you, God, that you sent your son Jesus. Thank you for your amazing, powerful plan to rescue us.”