By Becca Dean is a writer and PhD researcher in Durham. She has written Be Live Pray, a book to help young people engage in prayer and spirituality in more inclusive and creative ways, and blogs at beccaislearning.com 2018-03-22T00:00:00+00:00 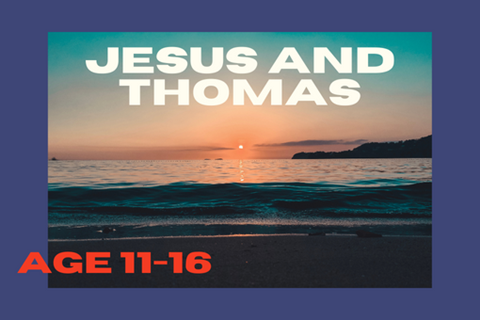 Background: In this session, we see Jesus’ resurrection through the eyes of Thomas, the ‘doubter’; a man we can probably all identify with. Be aware that different members of the group are likely to have different responses to Jesus’ resurrection, and try and make it a safe space for them to honestly share where they’re at without being frightened or reactive to people who share their doubts.

As you begin the group time, settle down with refreshments and start a conversation about things that are too good to be true. Does the group know what that means? Have they ever had moments that were so wonderful or got some news that was so good that it felt too good to be true? Have you ever been told something so great you didn’t believe it at first?

Play the game ‘two truths and a lie’ with the group to introduce the theme of believing the unbelievable. In this game, people take in turns to say three things about themselves. Two of these statements have to be true, but one must be a lie. Other people have to guess which one is the lie. It’s also a good game to help everyone get to know each other. It might be helpful to prepare your statements and go first to give an example. This will give the group time to prepare their statements.

Read the story of Jesus and Thomas together. You could help the group engage a bit better with the story by asking them to take it in turns to readout a verse each. That way they have to follow the passage!

Then split the group in half and ask them to role-play a debate between disciples who have seen Jesus alive again, and those who haven’t and don’t believe. You might want to set some rules about how you manage listening to each other, or act like a ‘chair’ for the debate to make sure they hear each other. Ask the disciples who have seen Jesus to try and convince the others that Jesus is risen, and ask the other half to make it hard to convince them by arguing back with different points.

Ask the group a series of discussion questions to help them unpack the story in more depth:

Give each group member a piece of paper and ask them to draw around their hands. They may need to help each other. These are representations of Jesus’ hands.

Ask them to consider what reasons or evidence they have to believe that Jesus is alive, and to write these on Jesus’ hands. It might be to do with facts, or people who’ve told them, or moments when they’ve felt a connection with Jesus in the world today.

Feel free to continue this activity in the atmosphere of discussion if you feel that’s more helpful to the group, or alternatively to sit in silence with some music playing to give individuals space to consider their own thoughts. At the end you could ask the group if they’d like to share the reason they have for believing that Jesus died and rose again.

Lead the group on a guided meditation, using their imaginations to think about what Jesus might say to them today. Encourage them to close their eyes and sit or lie down comfortably as you read out the following:

You’re in the room with the disciples, still reeling from the shock of losing Jesus; feeling fragile and afraid now that the person you’d put all your hope in has died. The atmosphere is sombre, and you’re worried about what other people might think of you now that you’ve lost Jesus.

Some friends come to you filled with a strange kind of energy and euphoria. They tell you they’ve seen Jesus. They look like they believe it, but it’s hard to imagine. Are they lying to you? Are they crazy with grief? Or could they be telling the truth? Is that just too impossible to be real? What would it mean if they were telling the truth? A strange kind of longing for hope stirs in you.

As you mull it over – whether it’s true or too crazy – Jesus walks into the room, even though the doors are locked. In his gentle way, he walks over and kneels next to you so you’re both at eye level, and he gives you that piercing stare that had become so familiar. He’s there in front of you, but it’s still almost too much to believe. But then he speaks… What does he say to you?

Give the group some space in the quiet to listen to and imagine what Jesus would say to them in that moment (explain to them that you are also doing this). When you feel they’ve had a good amount of time to think over how Jesus might respond, maybe for a few minutes, finish the time of silence by saying praying out loud so the group knows the time is ending, and to help them conclude this time.