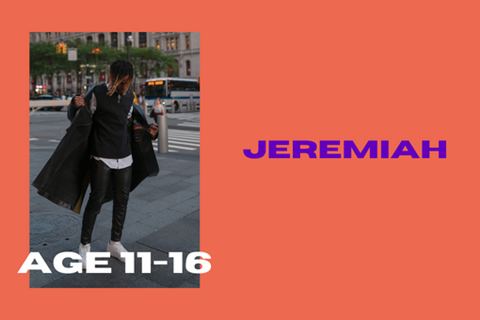 As the young people arrive, serve them the refreshments you have provided. Try to have something a bit more interesting than biscuits and squash. Do you have the facilities to make toast and tea? Could you provide a healthy option? As you eat and drink together, chat about the young people’s lives. Throw in the question: who do we listen to today? Who warns us about dangers ahead?

You will need: images of Banksy’s artworks (available online)

Many of Banksy’s works are political pieces that say something about how we live today, and talk about social injustice etc. Show them to the group and ask them to comment and feedback. What do they think Banksy is saying in each of the pieces? Help them if they get stuck. Explain that although Banksy doesn’t say these images are words from God, they do have a certain similarity with the role of the prophets in the Old Testament, and one such prophet is Jeremiah.

Ask the groups to get comfortable. Explain that you are going to read an imaginative retelling of Jeremiah 36. Read slowly and deliberately. Let the atmospheric and lyrical language of the script draw the group into the narrative:

The king sat and listened. Despite the thick walls of his winter palace and the fire that roared in front of his legs, a chill seeped through his weary bones. He had heard all these words before. They were like an echo in his ears. They bounced off the high walls, repeating themselves.

His bony finger beckoned Jehudi towards him as the fire crackled and spat embers. The scribe stopped reading, yet still the words reverberated around the room. He stepped closer to the king. The king reached out and took the scroll. Jehudi’s arms and empty hands remained where they were like a mime.

Riiiiiiiip! The king tore the end strip off the scroll, which contained the words just read, and handed the rest back to the waiting scribe. The king motioned for Jehudi to continue.

Royal bones creaked as he leant forward. He held the end of the scroll toward the fire, it caught and flickered. The flames licked across the words that Jehudi had just read. Letter after letter was eaten by the flame. The king threw the burning prophecy into the fire. Gone. But the words still came as Jehudi continued to read.

Every few minutes the king stopped the scribe and tore more off the scroll. Each piece was lit and then dropped into the fire. There was more fuel but the king didn’t feel any warmer.

Jehudi stopped reading. He had finished. The bony finger summoned the scribe forward once again. The hand grasped the last of the scroll and dropped it into the fire. The final words turned dark, then to ash and soot. Smoke rose from the dying scroll but this was no offering of incense to God. This was a refusal to hear God’s words through Jeremiah’s message. Jeremiah, the miserable prophet. Even though the king had banned Jeremiah from being near him, the prophet still managed to share his message of doom and destruction.

But the king had got rid of that message. The scroll was burnt. The words were gone. There was nothing left. So, why did the words still echo in the dark, cold, winter palace?

You will need: pens; paper; pot of cold tea (with the bags still in)

Give each young person a piece of paper and get them to screw it up into a ball and open it out. Use the tea bags to stain the paper or dip the paper into the tea . If you have an oven, dry the paper in it. This won’t take long so keep an eye on it; we don’t want it to catch light… yet!

While the paper is drying ask the young people to think about what God might be saying to them. If Jeremiah, or another prophet, had a message from God what would they be saying?

On the aged paper encourage the young people to write a ‘private’ message from God to them. Explain that no one will see what you write as you will be ‘burning’ them afterwards. If they’re struggling, encourage them to think of these questions: