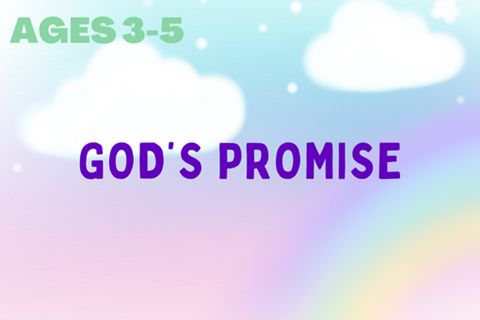 Background: After God’s promises in chapters 12 and 13, Abram receives another promise, this time specifically about a son. Abram and Sarai were too old to have children, but Abram believed God. Even though he took matters into his own hands later on (with Hagar and Ishmael), Abram completely trusts God at this point, despite the promise seeming unlikely. How readily do we trust God, even though situations seem impossible? How can we help young children discover the trustworthiness of God?

As they arrive, invite the chil­dren to sit down with you in a circle. Share out any refresh­ments you have and ask them about their week. Share in their excitements and disappointments, and enjoy being a group together. Ask the children if anyone has made them a promise this week. Did someone promise them sweets or that they would go to the park? Did that promise come true?

You will need: simple promises written on paper; hat or bag; anything needed to fulfil your promises

Before the session, write out some simple promises on slips of paper, then place the slips in a hat or bag. Write things like: “I promise to give everyone a piece of apple.” “I promise to say hello to everyone today.” Include things that would be difficult to fulfil today, such as: “I promise to make you a cake.” “I prom­ise to paint a picture of everybody.”

In turns, take a promise out of the hat. If possible, the child should fulfil it straight away. If they can’t, can they keep that promise (for example, bring in a homemade cake or a hand-drawn picture) for the next time you meet? Say that we all mean to keep promises, even if they are difficult, but sometimes we aren’t able to. However, today’s story is about God, who does keep his promises.

You will need: equipment to make a big enough tent to sit in, such as blankets, chairs, clothes airers and cushions; torches

Show the children the tent-making equipment you have brought. Have fun making a tent, and then all sit inside it. Before you do, make sure the tent is safe and won’t fall on the children when they are inside. Take the torches in and switch them on so everyone can see. Once everyone is settled, tell the follow­ing story:

Do you remember Abram? He was a man who lived a long time ago. God told him to move from his home to a new place. And even though he was old, he did what God said. He travelled to a new place. When Abram got there, God promised that he would have a big family and a new home.

Sadly, there was a problem. Abram didn’t have any children. He was old, and his wife Sarai was also old. It didn’t seem like they were going to have a child. But Abram loved God and he knew that God loved him.

One night, Abram and his wife were asleep. Encourage everyone to pretend to be asleep. Abram had a dream. God spoke to him in that dream. God said: “Don’t be afraid! I will protect you and give you lots of good things!”

Abram spoke to God. He said: “You have given me lots of good things. Everything apart from children.”

But God said: “You are going to have a son of your own. Everything you own will be his!”

God took Abram outside. Ask all the children to get up and move outside the tent. God said: “Look up into the night sky. Can you count the number of stars?” To the children. Can you imagine lots and lots of stars? Shall we count them together? Count together until the children run out of numbers. That’s a lot of stars, isn’t it? I wonder why God asked Abram if he could count the stars. Let’s find out!

God told Abram that his family would be bigger than the number of stars in the sky! Can you imagine that? Having a family with that many members? How big is your family? Allow the children to answer. Well, Abram’s family was going to be bigger.

And do you know what? Even though it didn’t seem possible, Abram believed his friend, God.

Ask the children these ques­tions, giving everyone a chance to respond if they would like to:

On the large sheet of paper, show the children how to draw stars with the end of a candle. Say that that they won’t be able to see what they have drawn right away, but they will do later. Once you have filled your paper with stars, give out the paint and brushes, and ask the group to paint the whole paper dark blue. The wax stars will repel the paint and become visible!

As you work, chat about the story and ask what the children remember about it. Do they think that God will keep his promise to Abram?

You will need: star picture from ‘Creative response’

Stand around the picture of stars you made in ‘Creative response’. Ask the children to pick a star to look at and think about something they know about God, such as: “God loves me”, “God gives me family”, “God sent Jesus to be my friend”. Ask children for their suggestions, and give some of your own if the group is struggling.

After you have finished, thank God for all these things, and for keeping his promises.