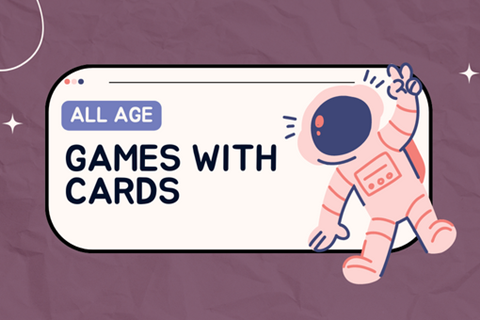 Despite the vast range of consoles and online games available, simple games are still surprisingly popular. No youth or children’s group is complete without someone playing Uno or Dobble, so here are some suggestions for games you can play with playing cards. You’ll need a pack of cards for each of these games (no surprises there…).

You will need: spoons (one for each player, minus one)

Sort the deck of cards into sets of four of the same value (for example four aces, four sixes and four kings), with enough for one set of four per player. Shuffle the cards and deal four out to each player. Place the spoons in the middle of the table.

On the word go, each player should try to collect a set of four cards by passing one card from their hand to the person on the left and picking up the card given to them by the player on their right. This continues until one person has collected four cards of the same value. At this point they grab a spoon from the centre, and    all the other players should follow suit (regardless of whether they have a set of four). The player left without a spoon is given a point.

The winner is the player with the fewest points at the end of the game (you could agree a certain number of rounds or just play until the group loses interest).

A variation of this game is called ‘Slam’. Instead of using spoons, place a spare card in the middle of the table. When one player has a set of four, they slam their hand on the spare card. Everyone else must do the same, the loser being the one with their hand on the top of the pile.

Both variations can become quite aggressive, so set some boundaries in place before you start (and remove rings and watches). A quieter version would be for the first player who gets  a set to put their thumb on their forehead. They can even carry on passing cards around until the other players notice.

You will need: playdough (optional)

Challenge the group to build the biggest tower they can from their pack of cards. You could give each child some playdough to secure the cards if you have it, as this may cause less frustration! The person, pair or team with the highest house of cards at the end of the time limit is the winner.

This is the simplest of card games. Choose a number of pairs from your pack and lay them all face down on a table. In turn, the players choose two cards to turn over. If they reveal a pair they take these cards and choose two more to turn over. If  not,  the  cards are turned face down again and the next player takes a turn. Continue until all the pairs are revealed. The winner is the player with the  most pairs.

You can tailor this to your session by creating your own set of cards. Famous couples, pairs of Bible characters, countries and their capitals could all work…There are many ways to create a unique game from this one idea.

For an older group, you could try a game like Obama Llama, which has this memory pair idea at its heart but expands it with extra mini-games.

You will need: buckets, baskets or containers; chalk or masking tape

Gather together a variety of buckets, baskets or containers and place them around your playing space. Mark out a line at one end for the players to stand behind. Assign the different receptacles different numbers of points depending on their distance from the playing line.

Give each player a number of playing cards. Competitors should try to throw their cards into the buckets, baskets or containers to gain points. The winner is the player with the most points. Award bonus points for the most creative or flamboyant way of throwing the cards.