Ethan and the vinyl revival 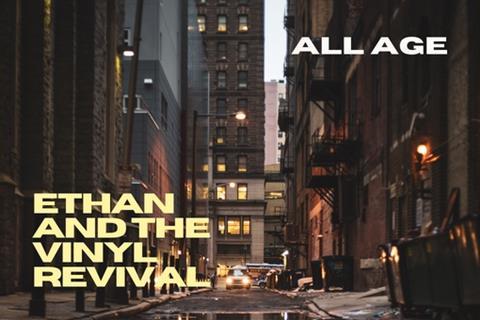 Ethan had always thought his dad’s vinyl records were lame and old-fashioned, but that changed when he pulled one out at random and a hand-drawn sun with wonky eyes stared out at him.

Primal Scream,” he read aloud. It sounded weird, but he and put it on the record player anyway. As soon as he heard the scratch of the needle on the vinyl, Ethan was hooked. Streamed music sounded too clean, too perfect, too sterile. Records had character; records had life.

From that day on, he worked every casual job he could to get money to buy records. Every time he had enough cash he went down to the music shop in town and bought another record. Before long, the shelves in his room were groaning under the weight of all that vinyl.

One day, as he was trying to squeeze his latest purchase onto a shelf, he thought: “I know, I’ll take all these out and build new shelves.” He stacked his records carefully on the landing outside his room, then he started to dismantle his shelves, removing them plank by plank.

“Dad! Dad!” he shouted down the stairs. His dad was watching rugby on the TV.

“What?” replied his dad.

“Have you got any spare planks of wood?”

“What? Er, yeah… There are some in the garage, I think,” he shouted.

Ethan clanked through the house with the spare wood and began reconstructing his bedroom.

Many hours later he was finally done. It was a bit rickety, but all his records sat comfortably on the shelves.

“Ethan, time to go! The film starts in 20 minutes!” shouted his dad.

Ethan took one last look at his records, grabbed his coat and ran out of the door.

Three hours later, they returned to be met with flashing lights and police tape blocking the way. They could just make out the shape of Mrs O’Brady’s Mini sticking out of their front room.

As they rushed towards the house, Ethan’s heart sank. Mrs O’Brady was sitting on their garden wall, apparently unhurt, but the front of the house had collapsed onto the Mini’s roof. Ethan’s room was visible through the gaping hole and his precious vinyl was scattered all over the rubble. Ruined.

Ask the young people these questions:

This story is based on Luke 12:13-21. Read the passage with the group and compare it with this one. Discuss what Jesus might be saying through this story, encouraging the young people to think differently about the parable.