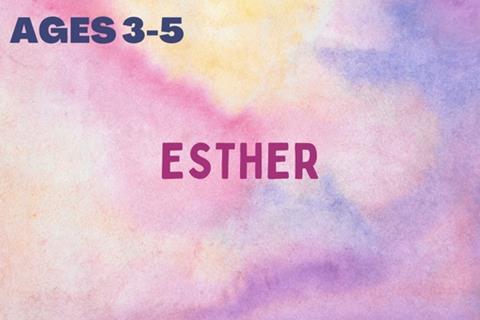 Esther ecame qen after King Xerxes had got rid of his previous queen, Vashti. Esther was a  Jew living in Persia, and she chose to keep her heritage secret. God used Mordecai to encourage Esther and give her the boldness to step out  and risk her life for the people. It’s worth reading through the whole book to get an overview of the story.

Invite the children to sit together in a circle. Encourage them to share stories from their week. Celebrate any birthdays or special events. It can be helpful to have an object  or cuddly toy to pass around for the child who is talking to hold. Ask the children: “What’s the bravest thing you have ever done or seen someone else  do?” Thank God that he is with you, and ask him to help you learn more about him today.

You will need: elastic; beads, cotton reels or something that small items can be threaded onto the elastic with

Explain that in your story today you are going to hear about a queen who did some- thing brave. She would have worn royal robes and expensive jewellery. Show the children how to make jewellery by threading beads onto their elastic. (Alternatively, you could make crowns alongside the same discussion.)

You will need: play food; a crown; a people paper chain

Sit the children in a circle and tell this story:

King Xerxes was the King of Persia. He had a queen, but she refused to do what he said, so he got rid of her! After that he wanted a new queen. Hold up the crown

whenever you talk about Esther being queen.

His officials gathered all the young women in the kingdom so he could pick one. He chose Esther.

Esther lived with her Uncle Mordecai and she was Jewish. The Persians  didn’t  like the Jewish people at all, so when Esther became Queen of Persia she didn’t tell anyone she was Jewish.

One day, the king’s servant Haman made a plan to get rid of all the Jewish people   and got the king to agree with his plan!

Mordecai heard about this plan and was heartbroken. He ripped his clothes, and cried and cried. But God heard him, and

he helped Mordecai come up with a plan. The law could not be changed, but perhaps Esther could help save her people…

Mordecai asked Esther to tell the king she was a Jew. He begged her. He said to Esther: “Maybe this is why God has made you queen. Maybe you are here for this very purpose.”

Esther was very scared. Even though  she was the queen she wasn’t allowed to go and speak to the king. She had to wait to be invited. He was the kind of king who got rid of a queen because she wouldn’t do what he said. You can imagine why she was nervous!

However, she knew it was the only way to save her people. She put on her royal robes and went to the king hoping that he would let her speak.

The king was pleased when he saw her, and let her speak to him. He said: “What do you want? I will give you anything.”

Esther told him she wanted to have a meal with the king and his servant Haman. She was trying to find a way to tell the king about Haman’s horrible plan.

Twice they had a banquet. Lay  out the play food for a banquet and invite the

children to sit down as if they had also been there. Pretend to eat the food together.

Esther didn’t say anything during the first meal, but during the second banquet she told them she was Jewish. She said that Haman’s plan would mean that she and all her people would die. The king was furious! He had his officials take Haman away.

Esther risked her life to save her people.

The king allowed the Jewish people to defend themselves, and even the king’s officials helped them!

Show the children your paper chain people and pull it out as you talk about Esther’s people.

Esther was scared, but God used her to help save her people. God made her bold and gave her courage. Esther knew she could ask God to help her when she felt afraid and alone.

You will need: paper; a person template; felt-tip pens or crayons; glue; things to decorate paper people with (for example sequins or stickers)

Before the session, cut out people paper chains that are as long as you can make them!

Explain that Esther was scared but that God gave her courage. God was with Esther and he saved Esther’s people. Give each child a people paper chain and invite them to decorate Esther and all the Jewish people.

You will need: the jewellery or crowns from ‘Intro activity’

Invite the children to wear their jewellery. Explain that God made Esther the queen,

and that she was able to help her people even though it was scary. Sometimes we will be afraid, but God is with us and helps us.

Invite the children to name a place  where they might feel afraid, and then to ask God to be with them and give them courage. Finish by saying: “Thank you, God, that you are with us.”