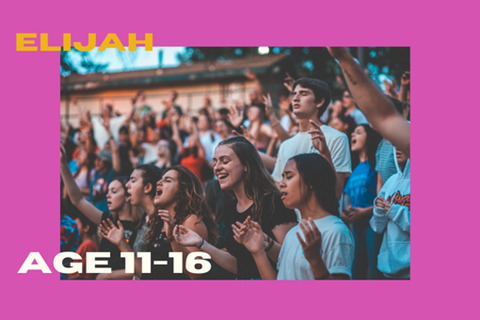 BACKGROUND: Elijah is feeling low after the high of recent events. He now feels as though everyone is against him and that he is all alone. He is on the run and in fear for his life, and rightly so. There are obvious signs of depression in the way Elijah reacts.

These sessions may evoke painful memories or stir difficult emotions about current situations. It is vital that those leading are able to offer appropriate pastoral care. It would be advisable to undertake a risk assessment of what to do if any difficult feelings are expressed.

Welcome the young people and share any refreshments you have provided. Invite the group to share what they have been doing over the past seven days. As they share, ask whether any good things have happened this week.

You will need: fact bingo sheets (see below); pens

Before the session, ask  each  group member to think of a fact about themselves that the rest of the group might not know.

It doesn’t have to be a secret or anything personal. It could be something like an instrument they play or their shoe size, but the more unique it is the better. Have them send this fact to you. On a computer, create a grid of squares and write a fact in each square. Print out enough copies for each member to have one.

Allow time for the group to talk to one another so they can try to match the fact with a person. You could have a prize for  the first person to match up every fact and individual. Explain that one thing that often makes us different from others is our belief in God. It might be that there are very few   or no other Christians at school.

Eli was a social media hero, a tech genius. He was internet famous. You know the sort. YouTuber, #iger, always on to the next social trend before anyone else and leaving behind those who were still sharing gifs of cats.

His greatest achievement was a meme that totally cut through the lies told by the government of his small country. The political policy the government had been following was in tatters. Government ministers and officials lost their jobs, and even the president and his family were in danger of being kicked out of office.

But that was the peak of Eli’s success. The government moved quickly to put out their ‘fake news’ to manipulate the story and save their careers. But that wasn’t all. Things soon got nasty.

Fortunately, he was a tech genius so he realised what was happening.  He had to get out quickly. The last thing he  saw were threatening emails from the arrogant politicians and even from the president.

Eli was on the run. He found himself in a tiny hotel room all alone. He didn’t know what to do. He wasted days, unable to even get up out of the bed. He just about managed to eat enough to keep himself alive.

One day he got an anonymous email. It said that he wasn’t alone. He logged on to a hidden network and set up a new Facebook account. He set up a group to talk about the issues with his government, switched  off the computer and then went back to sleep, wallowing in his despair.

When Eli woke up he logged on to the Facebook group and there were 7,000 requests to join. Eli wasn’t alone.

Ask someone to read 1 Kings 19. Explain that Elijah felt as though the whole world was against him. These events followed a great victory for him against the followers  of Baal. But now he seems to have feelings of paranoia and may well have been depressed at this time. The main difference between the stories of Elijah and Eli is that Elijah had God on his side. However, the challenge for Elijah, and for us, is often where we look for, and how we find, God.

What we expect and want can be quite different from the way God works.

Use the following questions to chat around the issues raised in the passage:

Ask the group to think about where people look for God. In today’s passage, ‘mighty’ God was found in a gentle whisper. There are obvious places like churches, but there also are other places. The Old Testament is full of God being found in different places, and quite often he is looking for us. After  all, it is the angels, God’s messengers, who go to Elijah.

Using images and words from the magazines, paints and other art materials, create some mixed-media art to illustrate where we might find God. Encourage the group to be creative and explore this topic. You might want to ask, as they work, how they would know that it is the God of the Bible they have found?

Point out that so much of our church time  is noisy. We have songs, sermons, activities and youth meetings! When Elijah looked for God in this passage there was a lot of noise. There was wind, an earthquake and fire, but no God. God was found in the quiet and in the whisper.

Explain to the group that you will have a time of silent prayer. Decide beforehand how long you will do this for and let them know. Just five minutes can seem like a very long the time for those not used to this practice. Do not have any candles or quiet background music; just embrace the silence.

Begin by saying: “Lord, we are here, quiet and listening for you…” Allow silence for the allocated time, then finish by saying: “Amen.” Allow time for people to share how they felt and if they heard anything afterwards if they wish to do so.