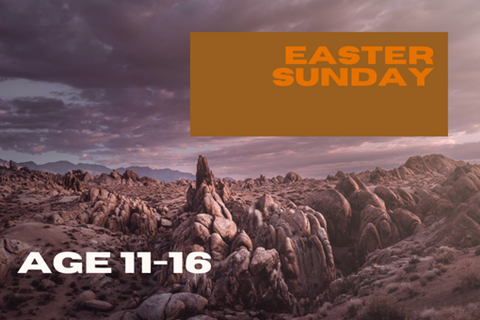 Background: After the sadness of Good Friday, we often think about that first Easter Sunday being a happy time. And it was, but it must have also been a confusing time too! This session, we will explore this confusion and use it to help our group start to make sense of the climax of the most important story in history!

As the young people arrive share out your refreshments and ask them about the most amazing thing they have heard or seen since they last met. It could be a piece of news, an Internet meme or some happy personal news. Have something to share yourself.

Jesus’ resurrection signifies a new start and a growing seed is a visual representation of that. Share out pots, some compost and seeds. Get them to plant the seeds and then water them. Explain you need to plant, water and watch, to see the new growth. You can either keep the plants and pots where you meet, if you have a safe place, or let the young people take them away.

Explain that you are either going to rewrite the passage or create a comic strip from a first-person perspective (so the story comes from the viewpoint of one of the characters).

Tell the story from the perspective of Mary Magdalene, one of the other women or Peter. Depending on the biblical knowledge of your group you could let them use the other accounts of the resurrection from Matthew, Mark and John. However, you don’t want to get into any deep discussion about the chronology of the events. This is about how the people involved felt.

As the group write or draw, explain that they are to focus on what the person sees as they go and arrive at the tomb. How they feel, both on the journey, when they get there and after. What do they think, again before, during and after: although they see the empty tomb, do they believe and understand? Finally, they should think through the implications of Jesus not being there. What does a living Jesus mean for them and the world?

Once the young people have written their stories, ask for volunteers to read them out / show them. There should be no criticism of the style or level of writing or artwork, but encourage discussion on what they have written concerning the feelings of the narrator to their story.

Ask the group these questions, making sure everyone has the chance to contribute:

Make sure there is no judgement toward what the young people say, just encourage discussion.

You will need: large piece of paper; marker pens

Explain that you are going to have a critical discussion and debate. There are no wrong or right answers, the aim is to explore how we and others have responded to today’s Bible passage.

Divide your paper into four sections. In the first section write ‘Liars’. Explain that it has been said that Mary and the other disciples made up what happened. The religious leaders also suggested this. They claimed that the disciples had stolen Jesus’ body and lied about him being resurrected.

In the second section write ‘Lunatics’. Explain that it is possible that Mary and the disciples were so upset with Jesus’ death, they thought they saw him. They were under a lot of metal anguish and they just snapped.

In the third section write ‘Legend’. Explain that here there are bits and pieces of truth. However, over time and finally when the events were written in the Bible the story had been elaborated, embellished and a man who had died was now resurrected.

In the final section write ‘Lord’. Explain that it might be just as the Bible tells us. Jesus was alive. What Mary and the other disciples saw was what happened. This is why so many lives have been changed since the events of that morning.

Ask for the group to feedback on each of the sections. What do they think of the explanation of each ‘L’? One thing to encourage the group to think about during the discussion is why. Why would they lie, why would they be lunatics, why would a legend be created and why should there be a Lord?

There is no need to ask for a verbal response, however leave the group with the question: which ‘L’ do you believe is right?

You will need: stones large enough to write on; marker pens

When the women arrived at the tomb, the stone had been rolled away. This was the beginning of a new stage in people’s relationship with Jesus. Explain that prayer, though often seen by people as a shopping list for God, it is more about developing our relationship. The more we talk to God, the more we change and do things.

Hand out a stone to each group member. Explain that they should write a prayer on it. The prayer isn’t about something they want, but about something they will do in their relationship. It could be a promise, or a ‘praise phrase’ they will use. Depending on your group, the stones can either be taken away as personal reminders or you could pile them in a ‘prayer zone’ where you meet.