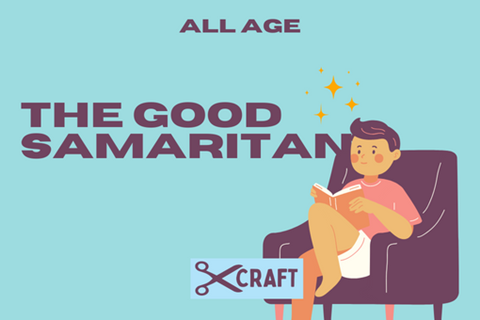 The good Samaritan is a well-told tale, but often a disservice is done by categorising it as a story that is merely about being loving and helping others. These crafts will help us pick up on themes of surprise, wonder, compassion and the messiness of loving our neighbour.

You will need: long, thin biscuits such as lotus biscuits or rich tea fingers; red jam; white fondant icing This craft helps children explore the themes of injury and compassion in the story. It also looks a bit gory, which only adds to the appeal! Cut the fondant icing into squares the same width as the biscuits. Put a small blob of jam in the middle of the biscuit and stick the fondant on top of it. Now smear a little bit of jam on top of the white fondant. This will now look like a plaster that has been taken off.

As you eat the biscuits, talk about the injured man in the story. Discuss the compassion he was shown by a stranger and how that might have felt.

Flatten or roll out the playdough, then ask the children to use the mark makers to draw a picture of something from the story that really stuck out for them. Use the creating time to talk about the story and  to notice the different marks each item makes. Allow time for the children to share their creations and   talk about what has affected them from the story. Why did they choose certain mark makers to create  their picture? 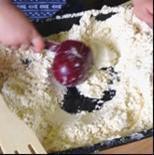 You will need: eight cups of plain flour, a cup of oil, marbles or coins

This story has some mess in it. Some of the characters avoid the injured man because they don’t want to touch the mess and make themselves unclean. The fact that someone who people would usually avoid turns out to be the helper adds to the lack of neatness. This craft is a bit messy and emphasises the fact that sometimes Jesus wants us to love people we might not deliberately seek out.

Mix the oil and flour until they are well combined. The flour will feel soft and will clump really easily, but it will also separate easily. Put the flour in a large container and hide marbles or coins in it. Get the children to search for them, expecting to get a bit messy as they pull them out! Use this as a starting point to discuss the fact that the people Jesus wants us to love are not necessarily the ones we see or relate to at first glance. 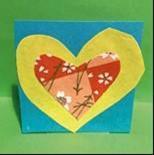 You will need: A5 paper; A5 card; scissors; glue; a selection of coloured paper

The pop-up contents of the card will come as a surprise, just as a Samaritan helping a Jew is surprising. The people Jesus wants us to love as our neighbours can also surprise us. The internet has lots of tutorials on how to make simple pop-up cards. Search ‘flower card’ on iheartcraftythings.com and you’ll find one with photos and a video.

When the children have completed the basic pop-up step they can decide what they would like to create for their pop-up pictures. Just make sure that whatever they make doesn’t protrude when the card is closed! As you make the cards, talk about the surprise of the pop-up and the surprise that the injured man’s helper turned out to be someone who was an outcast in Jesus’ culture. How does that part of the story relate to anything the children have heard about or experienced?