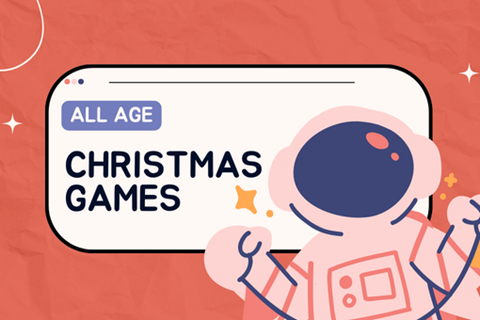 You will need: eight small prizes; newspaper and / or Christmas wrapping paper; sticky tape; music and the means to play it

Prepare the parcel before the session. Wrap each of the prizes in newspaper or wrapping paper, then group the prizes into four pairs and wrap those pairs up (you should end up with four parcels). Do the same again, wrapping pairs of parcels together, giving you two larger parcels. Finally, wrap those two parcels together to make one. You can include extra layers of wrapping at any point in the process to make the game longer. You could also include forfeits or tasks in between each layer.

Start the game in the normal way, playing and then stopping the music as the children or young people pass the parcel around a circle. When the parcel splits in two, pass the two parcels in opposite directions. Continue to do this until eight players have unwrapped prizes.

PIN THE TAIL ON THE REINDEER

You will need: a large picture of a reindeer with no tail; a cutout reindeer tail; Blu Tack; a blindfold; a marker pen

Stick your picture of a tailless reindeer to the wall. Stick a blob of Blu Tack to the top of the reindeer tail. Blindfold a player and give them the tail. Spin them around a couple of times, then challenge them to stick the tail in the correct place on the picture. Mark the position on the picture where they stuck the tail, then let another player have a go.

Play until everyone who wants to has had a go. Bear in mind that some children or young people will not want to be blindfolded. Look at the marks on the picture. The closest mark to the correct position is the winner!

WHAT’S IN THE STOCKING?

You will need: a large Christmas stocking (available from card and gift shops); a range of mystery Christmas objects such as a tangerine, a cracker or a candy cane

Before the session, gather together a range of mystery objects. Include some obvious ones and some that are more obscure.

Place one of the objects in the stocking and invite a player to try and work out what it is just by putting their hand inside. You could have two stockings and two sets of items and play in two teams. Each team sends a player to the front to identify an object. When they are successful they return to their team, a new item is put inside the stocking and another player comes forward to identify it.

You will need: a range of items that are difficult to wrap; wrapping paper; scissors; sticky tape; bows and ribbon; prizes (optional)

Give out the items (one per player) and challenge the group to wrap their item as beautifully as possible. Give them all the wrapping equipment you have brought and set a time limit. At the end of this limit display the presents and judge together which is the best. Award a prize if you have one. You could also award prizes for best concealed (the present that most successfully disguises what’s inside), least sticky tape used or neatest bow.

Split the group into teams and ask each team to choose a volunteer who is happy to be wrapped up. Challenge the teams to wrap their volunteer as best they can within a set time limit. At the end of the game, judge which person is wrapped most professionally.

Don’t forget to recycle the paper from both wrapping games.

You will need: a Santa suit; padding (such as cushions and pillows); a long garden cane, thick rope or similar

Play with different volunteers until you have a winner. If you have two Santa suits you could have two players limboing against each other.

Sit in a circle and start the game by saying: “Last Christmas, I was given…” and then say a gift (for example “a box of chocolates”). The next person says the whole sentence and adds on another gift: “Last Christmas, I was given a box of chocolates and…a giant teddy bear.” Continue around the circle until someone gets stuck. Then start the game again with the next player.

You could challenge the group to follow the alphabet with their gifts: “Last Christmas, I was given an angel for the Christmas tree, some Brussels sprouts, a Christmas pudding…” Or you could do a version of the ‘Twelve days of Christmas’: “On the fourth day of Christmas, my true love sent to me four pairs of socks, three tangerines, two tennis racquets and one Xbox One.”