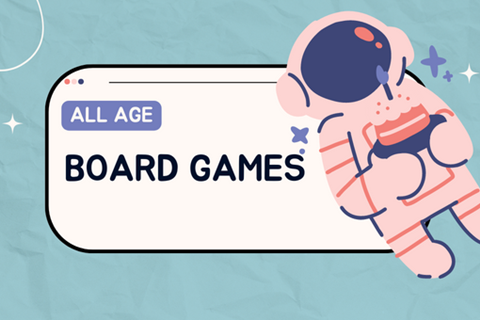 You might find that you have a lot of time at home with your children or young people. Board games are great for building social skills and spending quality time together. To this end, you might want to steer clear of games such as Monopoly, which can quickly result in a vast inequality between players (and angry outbursts from those who are suddenly forced to handover all their money). Here are some suggestions of games you can try.

Sometimes the simple games are the best. When you play this, you can chat about the ups and downs of life. It is a safe way to help children process experiencing disappointment, as well as exploring how downturns can quickly turn to good.

If you have the space, you could work together to create a large version of the game using whatever you can find in your house. Mark the squares out with masking tape on a carpet or work on a patio outside and use chalk. Create snakes out of bedsheets, and ladders out of cardboard tubes or garden canes.

THE GAME OF LIFE

You might have played it when you were younger. Interestingly, as an adult, it is not quite as engaging as you may remember! However, children love it and it is worth playing as you can chat about life – different life events that might happen, different paths you can take and what you and your family might hope for in the future. As you play, chat about what your different family members would like to happen in their lives, and the role God and faith might play in that

While travel remains difficult, particularly foreign travel, you can tour the world with Ticket to Ride. This is a fairly new game, which quickly gained a strong reputation. Starting with the American version in 2004, several different countries and versions have been added. However, you will need the America or Europe edition to start with, as these provide all the elements you need for a full game (the other versions are expansions of the basic game).

It’s more complex than a game like Tsuro (see below), so is more suitable for families with older children or young people. Players seek to complete routes by collecting train cards of different colours and claiming tracks between destinations. However, there are only a limited number of ways to get from place to place, and everyone is competing to complete their own routes (which are kept secret from the other players). Your routes might get blocked by your competitors, and you might have to take long detours! You could use this to chat about when things don’t go well, and changes to plans have to be made. This could be a good way into discussion over plans or events that have had to be cancelled; how can you bring good from such disappointment?

This is a simple concept, but engaging for all ages. Your playing token starts at the edge of a board marked out in squares six by six. In your hand you have three tiles, each with a different arrangement of pathways. You place a tile in front of your token and move it along the marked path on the tile. Each player does the same in turn, being careful not to follow a path which leads them off the board. The object of the game is to be the last person on the board.

As play progresses, players will come into contact with each other and have the chance to send their opponents off the board! Some players may have no choice but to send themselves off the board. Chat together about how we treat others when competing in games and in life. How much do we try to send others off course to gain advantage for ourselves?