Joel Toombs believes the film has value, but it is not without its flaws 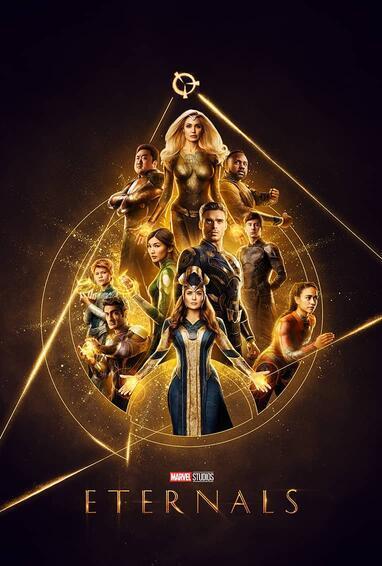 Overview: Ten eternal ‘good’ aliens are sent to protect earth from bad aliens and help humanity develop at the right speed, but there is a darker agenda behind it all.

The diversity among the characters, the tackling of big questions, the new aspect to the established Marvel franchise.

The wooden comedy and sometimes awkward acting. It’s too long, complicated and drawn out, especially for younger teens.

There’s definitely a lot in here to enjoy visually …and philosophically; lots to discuss in a faith context with older teens particularly, but it’s a hard long movie to sit through just for that. If you are a committed Marvel fan then you can’t not watch it, and it is worth a watch; but there’s potentially some uncomfortable themes and scenes too, so not one to go into lightly.

Some nice philosophical questions around whether humans are growing and improving into a better world of more peaceful and advancing societies – or whether we just continue to self-destruct as a planet – and what part ‘higher powers’ play in our development.

There is a sex scene near the beginning. It’s tastefully done but really quite unnecessary to the story line so it feels like the director was trying to make a point that possibly didn’t need to be made. There is also a kiss between two men later on, (in the context of a stable gay relationship bringing up a child together) so it could mean frank conversations about sex and sexuality as a result.

It is also a long and quite complex film. I think this is supposed to make it an epic, but in reality there’s lots of postulating and staring into the distance stood in a neat line wrapped up in slow moving dialogue. In terms of the MCU while it is different and has some fresh ideas it is not the funnest Marvel superhero movie out there! For younger teens I’d say go watch Spiderman instead!

It does contain lots of interesting ideas to spark conversation and wide-ranging thoughts. Friendship and loyalty crop up a lot. Sprite’s unhappiness at being stuck in her youthful body… Thena’s apparent mental illness and affliction with possessing rage… Druig’s all-consuming pain at the suffering in the world… and great to see a deaf superhero in Makkari whose character was handled delicately and without being patronising – in fact there is lots of diversity throughout which may inspire all kinds of young people from different backgrounds and situations.

However, there are also some disturbing ideas – genocide (of the Aztecs, and images of Hiroshima) and the propensity of violence among humans is portrayed frankly. Also violence does occur frequently throughout the film and, while not outrightly gory, can be graphic and upsetting – for example at the start of the film a monster emerges from the sea and eats an innocent fisherman in front of his son.

Just remember the origin of these movies are classic comics and it does make a bit more sense.