Different and yet the same

Story for home. Use this story as part of a God-time at home, or as a bedtime story. It can also be used alongside this month’s Together sessions. 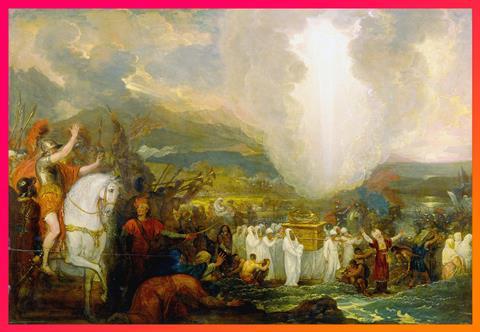 Some things were different.

Moses, who had led God’s people out of Egypt, was dead. And in his place, God had appointed a man called Joshua.

Yes, Joshua, who had spied on the land of Canaan and who had bravely encouraged God’s people to enter it.

Some things, however, were much the same.

Between God’s people and the land he had promised them stood a body of water. The Jordan River. Not quite as wide as the Red Sea that Moses had led them across. But wide enough, for it was harvest time – the time of year when the Jordan River flooded.

So some things were different.

God did not tell Joshua to raise his staff above the water, like he told Moses. But he gave Joshua instructions, nonetheless!

He told him to send priests, carrying the ark of the covenant, to the edge of the Jordan River.

The ark of the covenant was the big box that held three things:

The stone tablets God had given to Moses, upon which God had written his laws.

A pot of manna – the food God had given his people to nourish them on their journey from Egypt.

And, yes, I know what you’re thinking.

Some things were the same!

Perhaps it was Moses’ staff. The one he held above the Red Sea.
Sadly, no.

It was the staff that belonged to Moses’ brother, Aaron. A special staff, as well, that came to life and budded.

So things were different, after all.

But no less amazing.

For when the priests’ feet touched the water, the water stopped flowing! It didn’t split in two, like the Red Sea. It was a river, after all. Splitting would have done no good. It had to stop flowing. So, instead, it piled up high, on one side and left a dry path so that God’s people could walk across.

And that was much the same.

Until it was different.

When God’s people crossed the Red Sea, they were running for their lives. Pharaoh was after them, after all, with an army, 600 chariots strong.

But when they crossed the Jordan, it was important for them to remember what was happening - that they were entering, at last, the land that God had promised them.

So God told Joshua to choose a man from each of the twelve tribes to pick up a stone from the river bed, as they crossed.

And then God told Joshua to make an altar out of those stones – an altar to stand in their new land.

“Your children will ask you,” God said, “‘What do these stones stand for?’ And that will give you the chance to tell them how I stopped the Jordan River from flowing and gave you safe passage across it. And then they will know how mighty I am, and worship me.”

A mighty God. Worthy of our worship and awe.

And yet, the same!

Bob HartmanBob Hartman is an author and performance storyteller, who has spent many years writing and telling stories.