Edgar the Dragon and additional needs

By Mark Arnold, also known as the Additional Needs Blogfather, is co-founder of the ‘Additional Needs Alliance’ – a learning and support community for youth and children’s workers, parents and organisations. You can check out his original blog post on Edgar the Dragon here. 2019-11-20T00:00:00+00:00

The ad features the latest adorable character created by the stores: Edgar the dragon, who struggles to fit in, and his friend Ava. Edgar is always trying to fit in and is desperate to do the things that other children in the town love doing: building snowmen, ice skating or watching the Christmas lights being switched on. But every time Edgar tries to get involved, something goes wrong and he ends up as the centre of attention for all the wrong reasons. You see, he’s a fire-breathing dragon – and the world isn’t made for him and his smoking nostrils.

Watching the advert for the first time, I was in tears. Edgar reminded me a lot about children with additional needs – including my own son – who, like the dragon, just want to be accepted and included in ‘normal’ things, while still being loved and cherished for who they truly are.

Children with additional needs are not to be blamed for their disability, difference or diversity. They were either born the way that they are or have acquired their condition through illness, an accident or a myriad of other reasons. No matter what – they live in a world that, like Edgar, doesn’t understand them, doesn’t appreciate them or value them and definitely isn’t set up for their needs. It’s a world where it is hard for them to fit in.

In the advert, Edgar has a friend, Ava, who is constantly trying to look out for him and help him navigate life. At first, when things are going wrong, she tries to stop him from getting into trouble or causing havoc by tying a scarf around his nostrils to stop him from breathing fire like he normally does. It doesn’t work out – but how could it? Edgar is a dragon through and through – and so not being a dragon for him is impossible, just as it is impossible to stop a child with additional needs from being who they are and doing what they do.

After melting the snow man, cracking the ice rink and ruining the Christmas display, Ava realises that the best way to support Edgar isn’t to try and change the way that he is but to help him find a way of being involved and included while still true to himself – as well as helping the townsfolk to accept and welcome him for who he is. Ava brings Edgar to the family Christmas table, and after a brief moment of tension, Edgar blows fire from his nostrils to light up a Christmas pudding. He is finally the centre of attention for the right reasons.

What can we learn from this? Children with additional needs are best supported and helped not by making them ‘fit in’, but by helping others to be educated about their needs and therefore accept them for who they already are. There will always be ways to include and involve each and every child, allowing us to delight in diversity and difference. 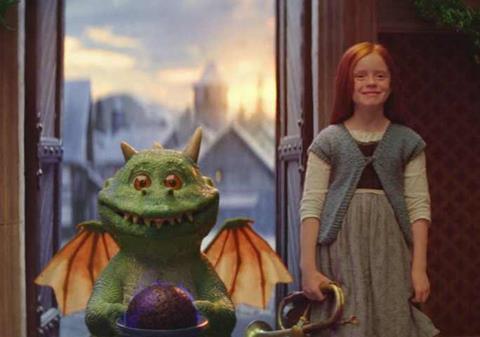 The town in the advert would be much poorer without Edgar, or if they tried to make Edgar someone that he is not. And the town would be much poorer without Ava too, who is prepared to stand up, support and encourage her friend despite his differences. I long for a world where everyone is accepted for who they are, for what they can contribute and for the diversity that it brings. I long for a world where there are more people like Ava, who aren’t put off by disability and are kind and loving to everyone.

So while I’m sure that this year’s iconic advert will touch the hearts of many for a wide range of reasons – let’s focus for a moment on the story of acceptance, welcoming and belonging and see how we can utilise this on our own lives this Christmas.

Mark Arnold, also known as the Additional Needs Blogfather, is co-founder of the ‘Additional Needs Alliance’ – a learning and support community for youth and children’s workers, parents and organisations. You can check out his original blog post on Edgar the Dragon here.